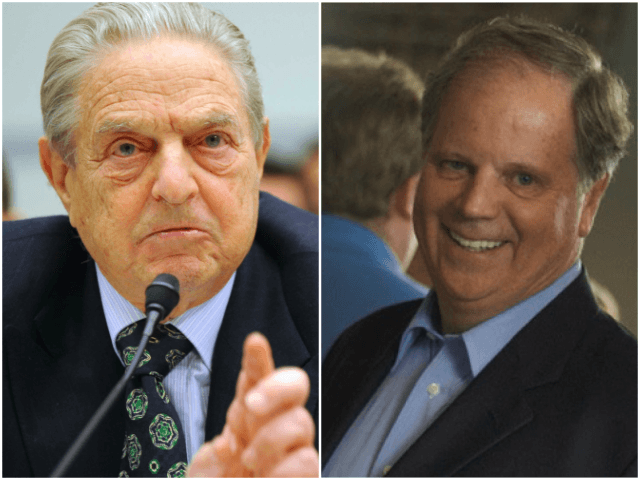 (New York, NY) Doug Jones, the Democratic candidate for December’s Senate special election in Alabama, took a leading role in an effort by a far-left legal group massively funded by billionaire George Soros to grant full voting rights nationwide to felons released from prison, including those convicted of murder, rape, and other violent crimes.

Besides his direct role advocating for the votes-for-criminals scheme, Jones is also listed by the Soros-funded organization as a “supporter” of the voting drive for felons alongside a grouping of radical Soros-financed organizations.  Jones is himself tied to some of those other Soros-funded groups.

In December 2011, Jones was one of fifteen signatories on a letter sent to Congress from the Brennan Center for Justice at New York University Law School calling for the restoration of “federal voting rights to the nearly four million Americans living, working and paying taxes in our communities who have been disenfranchised because of a criminal conviction in their past.”

The Brennan Center has been the recipient of numerous grants from Soros’s Open Society Foundations totaling over $7,466,000 from 2000 to 2010 alone.

Brennan’s letter, signed by Jones, was in support of the Democracy Restoration Act, which was introduced in 2011 by Rep. John Conyers, Jr. (D-MI) and Sen. Ben Cardin (D-MD).

Conyers has a long history of association with the Democratic Socialists of America, or DSA, attending and speaking at numerous DSA events.  He is a member of the Congressional Progressive Caucus, which was originally so closely linked to the DSA that until 1999 the Caucus’s official webpage was reportedly hosted on the DSA’s own website.

The issue is a hot button topic in Jones’s own state. Last May, Alabama’s Gov. Kay Ivey signed a law that defined a clause in the State constitution denying the right to vote to anyone who has committed a crime that demonstrates “moral turpitude.”  The new law generated a list of about 50 crimes that fit under the “moral turpitude” banner, including murder, kidnapping, and sexual abuse.

Yet progressive activists and groups such as Think Progress, a project of the Soros-funded Center for American Progress, have taken issue with Alabama’s reported refusal to actively notify potentially tens of thousands of former felons that they regained their voting rights. A federal judge in July sided with Alabama, affirming that the state does not need to make such notifications.

For decades, Jones has been a champion of voting right for all criminals, including the most violent offenders, putting him at the radical end of the spectrum on the issue.

Back in 2005, he wrote an amici curiae (“friend of the court”) brief on the matter with Eric Holder, who would go on to become Attorney General under the Obama administration. Jones’s 2005 brief, which was written for a Supreme Court case involving the state of Florida for voting for criminals, is featured on Brennan’s website.

The 2011 Brennan Center letter to Congress signed by Jones calls for a blanket restoration of voting privileges to all criminals upon release from prison and return to their communities.  The missive states, “People who commit crimes must and will serve all terms of their sentence. But once the criminal justice system has determined that they are ready to return to the community, they should receive both the rights and responsibilities that come with the status of being a citizen. Restoring the right to vote is simply good law enforcement policy.”

Jones listed with Who’s Who of Soros-funded radical left

Besides the letter, Jones is currently listed on the Democracy Restoration Act (DRA) information page of the Brennan Center’s website as among the “Groups and Individuals who support the DRA.”

Jones is listed there alongside scores of far-left activist groups funded by Soros, some of which also have ties to Jones. Those Soros-funded groups include the Alliance for Justice, the American Civil Liberties Union (the recipient of a $50 million Soros grant), Black Youth Vote!, the NAACP and scores of others.

Also listed with Jones is the Campaign for America’s Future (CAF), a Soros-funded radical think tank that partnered with the Occupy movement to organize anti-capitalist protests.

CAF co-founder Robert Borosage previously served as director of the Marxist-oriented Institute for Policy Studies, which is known for espousing pro-Soviet views during the Cold War.

Borosage also helped found the controversial Apollo Alliance, a project of the Soros-funded Tides Foundation. Apollo, which changed its name to the Blue Green Alliance following negative publicity about its far-left politics, was endorsed by the controversial former group known as ACORN, or the Association of Community Organizations for Reform Now, a group whose pet project is currently being pushed by Jones.

On his 2017 Senatorial campaign website, Jones advocates a living wage plan for the state and country that, as Breitbart News reported last week, has a history of hurting small businesses, negatively impacting local economies and decreasing employment opportunities for low income workers. The living wage was originally the project of ACORN, which played a central role in enacting the scheme in several cities.

Another co-founder and director of CAF—listed on Brennan’s website alongside Jones—is Robert Hickey, who also co-founded the Soros-funded Economic Policy Institute, which itself is also listed with Jones on the same Brennan Center webpage list of “supporters.”

Earlier this week, Breitbart News reported that Jones spearheaded an effort on behalf of the Soros-funded Brennan Center that sought to fundamentally transform the role of U.S. Attorneys from one of prosecuting criminals to activists that enact a so-called progressive criminal justice agenda. A key aspect of Jones’s Brennan campaign was to push reduced sentencing for drug offenders. This has also been a major policy aim for Soros.

Another group listed alongside Jones is the National Lawyers Guild (NLG), which is famous for defending protesters from radical groups who get arrested during the course of disruption campaigns. A notable former member of the National Lawyers Guild is Bernardine Dohrn, the NLG’s first national student organizer. Dohrn was a leader of the Weather Underground anti-American domestic terrorist group along with her husband, former domestic terrorist Bill Ayers.

Also signed as a “supporter” with Jones is Sojourners, a Christian evangelical ministry known for embracing so-called liberation theology, which is described by Discover the Networks as teaching that the New Testament gospels “can be properly understood only as calls for social activism, class struggle, and revolution aimed at overturning the existing capitalist order and installing, in its stead, a socialist utopia.”

Debate over voting for convicts

Proponents of voter restoration for convicts argue that the inability to vote doesn’t deter crime and may impede them from reintegrating into society.

If the prospect of incarceration doesn’t deter criminals, losing the right to vote certainly doesn’t. We don’t permanently strip criminals of freedom of speech or religion, the right not to be subjected to unreasonable searches or the right against self-incrimination. Why deprive them of the vote?

The chief result of disenfranchising former inmates is to discourage them from changing their ways and fully integrating into society. The people likely to be obstructed from voting are not the incorrigible criminals but the reformed ones. They get jobs, pay taxes and keep their noses clean—the sort of behavior that Republicans, as well as Democrats, should want to encourage.

There are lots of bad things criminals can do once they’re released back into society. Voting isn’t one of them.

In a Newsmax piece titled “6 Reasons Ex-Felons Shouldn’t Vote,” Jerry Shaw opined that “ex-prisoners have demonstrated dishonesty and irresponsibility in their character by committing a crime, especially a serious crime and have forfeited their right to vote.”

The 14th Amendment to the U.S. Constitution, which addresses equal protection under the law, does not always pertain to felons and ex-felons, according to Circuit Judge Alex Kozinski in dissent of a U.S. 9th Circuit Court of Appeals decision in 2006. Although racial, gender and reproductive rights have been upheld under the amendment, felonious crimes allow lawmakers to introduce felon disenfranchisement laws.

Roger Clegg previously testified to Congress on the issue of voting privileges for felons, and he writes a policy paper on the matter.

Writing at the Center for Equal Opportunity, Clegg advocated:

We don’t let everyone vote—not children, not noncitizens, not the mentally incompetent. There are certain minimum and objective standards of trustworthiness, responsibility, and commitment to our laws that we require before people are entrusted with a role in the solemn enterprise of self-government. Those who have committed serious crimes against their fellow citizens don’t meet those standards.

Written with research by Joshua Klein.