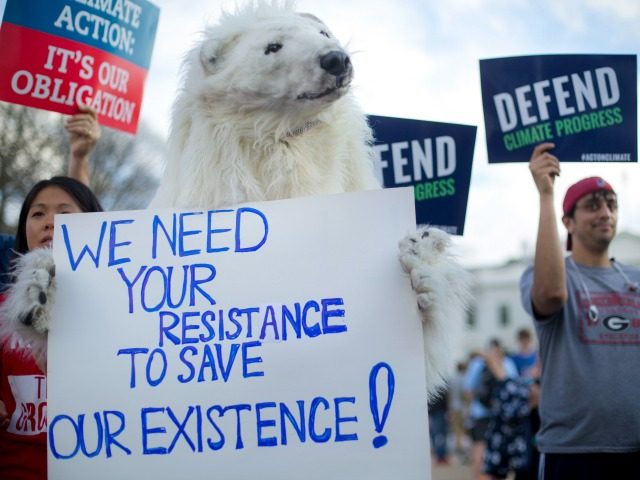 Possibly the Best Thing You Will Ever Read on Global Warming

Maybe the biggest of all the lies put out by the global warming scaremongers is that the science is on their side. No it isn’t. And if you’re in any doubt at all you should read this interview with the brilliant scientist István Markó. It tells you all you need to know about the science of global warming.

Dr. Markó, who sadly died earlier this year aged only 61, was a professor and researcher in organic chemistry at the Université Catholique de Louvain, Belgium’s largest French-speaking university. More importantly for the purposes of this interview, he was one of the world’s most outspoken and well-informed climate skeptics, who contributed to several articles on the subject for Breitbart News.

Before he died, he gave an extensive interview to the French journalist Grégoire Canlorbe. Here are highlights of the English translation. As you’ll see, he doesn’t pull his punches.

CO2 is not – and has never been a poison

Each of our exhalations, each of our breaths, emits an astronomical quantity of CO2 proportionate to that in the atmosphere (some >40,000 ppm); and it is very clear that the air we expire does not kill anyone standing in front of us. What must be understood, besides, is that CO2 is the elementary food of plants. Without CO2 there would be no plants, and without plants there would be no oxygen and therefore no humans.

Plants love CO2. That’s why the planet is greening

Plants need CO2, water, and daylight. These are the mechanisms of photosynthesis, to generate the sugars that will provide them with staple food and building blocks. That fundamental fact of botany is one of the primary reasons why anyone who is sincerely committed to the preservation of the “natural world” should abstain from demonizing CO2. Over the last 30 years, there has been a gradual increase in the CO2 level. But what is also observed is that despite deforestation, the planet’s vegetation has grown by about 20 percent. This expansion of vegetation on the planet, nature lovers largely owe it to the increase in the concentration of CO2 in the atmosphere.

There have been periods where the CO2 concentration was many times higher than now. Life thrived.

During the Jurassic, Triassic, and so on, the CO2 level rose to values sometimes ​​of the order of 7000, 8000, 9000 ppm, which considerably exceeds the paltry 400 ppm that we have today. Not only did life exist in those far-off times when CO2 was so present in large concentration in the atmosphere, but plants such as ferns commonly attained heights of 25 meters. Reciprocally, far from benefiting the current vegetation, the reduction of the presence of CO2 in the atmosphere would be likely to compromise the health, and even the survival, of numerous plants. To fall below the threshold of 280 or 240 ppm would plainly lead to the extinction of a large variety of our vegetal species.

Animals need CO2 too. And by the way – forests are not the ‘lungs of the earth’…

In addition, our relentless crusade to reduce CO2 could be more harmful to nature as plants are not the only organisms to base their nutrition on CO2. Phytoplankton species also feed on CO2, using carbon from CO2 as a building unit and releasing oxygen. By the way, it is worth remembering that ~70 percent of the oxygen present today in the atmosphere comes from phytoplankton, not trees. Contrary to common belief, it is not the forests, but the oceans, that constitute the “lungs” of the earth.

It is not true that CO2 has a major greenhouse effect. Reports of its influence have been exaggerated

It is worth remembering here too that CO2 is a minor gas. Today it represents only 0.04 percent of the composition of the air; and its greenhouse effect is attributed the value of 1. The major greenhouse gas in the atmosphere is water vapor which is ten times more potent than CO2 in its greenhouse effect. Water vapor is present in a proportion of 2 percent in the atmosphere. Those facts are, in principle, taught at school and at university, but one still manages to incriminate CO2 alongside this learning, in using a dirty trick that presents the warming effect of CO2 as minor but exacerbated, through feedback loops, by the other greenhouse effects.

Over the last 12,000 years, what we have witnessed is an oscillation between warm and cold periods, thus periods with rising and declining sea levels. Incontestably, sea and ocean levels have been on the rise since the end of the Little Ice Age that took place approximately from the beginning of the 14th century until the end of the 19th century. At the end of that period, global temperatures started to rise. That being said, the recorded rise is 0.8 degrees Celsius and is, therefore, nothing extraordinary. If the temperature goes up, ocean water obviously dilates and some glaciers recede. This is something glaciers have always done, and not a specificity of our time.

Don’t worry about shrinking glaciers. We’ve been here before…

In Ancient Roman times, glaciers were much smaller than the ones we know nowadays. I invite the reader to look at the documents dating back to the days of Hannibal, who managed to cross the Alps with his elephants because he did not encounter ice on his way to Rome (except during a snow storm just before arriving on the Italian plain). Today, you could no longer make Hannibal’s journey. He proved to be capable of such an exploit precisely because it was warmer in Roman times.

Sea levels are currently on the rise; but this is an overestimated phenomenon. The recorded rise is 1.5 millimeters per year, namely 1.5 cm every ten years, and is, therefore, not dramatic at all. Indeed, it does happen that entire islands do get engulfed; but in 99 percent of the cases, that is due to a classic erosion phenomenon[1] and not to rising sea levels. As far as the Italian city of Venice is concerned, the fact it has been faced with water challenges is not due to any rise of the lagoon level and is just the manifestation of the sad reality that “the City of the Doges” is sinking under its weight on the marshland. Once again, the global sea and ocean levels are rising; but the threat effectively represented by that phenomenon is far from being tangible. I note that the Tuvalu islands, whose engulfment was previously announced as imminent, not only have not been engulfed, but have seen their own land level rise with respect to that of waters around them.

[1] The island shores are eroded by the persistent pounding of the ocean waves. This is perceived as ‘sinking’ or as ‘sea level rise,’ but the upward creep of the waters is due to island soil being washed away.

The polar ice caps are fine too

Still another phenomenon we tend to exaggerate is the melting of the polar caps. The quantity of ice in the Arctic has not gone down for 10 years. One may well witness, from one year to the other, ice level fluctuations, but, on average, that level has remained constant. Right after the Little Ice Age, since the temperature went up, the Arctic started to melt; but the ice level in the Arctic finally settled down. Besides, ice has been expanding in Antarctica over the last 30 years and, similarly, we observe in Greenland that the quantity of ice increased by 112 million cubic kilometers last year. On a global scale, glaciers account for peanuts, with most of the ice being located in Antarctica and so on.

From storms to tornados, extreme events are going down all around the world and, when they occur, their level is much lower, too. As explained by MIT physicist Richard Lindzen, the reduction of the temperature differential between the north hemisphere and the equatorial part of our planet makes cyclonic energy much smaller: the importance and frequency of extreme events thus tend to decrease.

If you look at satellite data and weather balloon measurements, you then note that the temperature rise around the world is relatively modest, that it is much lower than the rise that is predicted for us by authorities, and that these predictions rely on calculations that are highly uncertain. This is because the simulation inputs cannot take into account past temperatures, for which there is no precision data[1], except by subjectively adjusting x, y, z data that are not always known. The recent temperature spikes measured by satellites and balloons are part of a classic natural phenomenon which is called El Niño. This short-term phenomenon consists of a return of the very warm waters at the surface of the equatorial Pacific Ocean. The heat thus liberated in the atmosphere pushes up the global temperature and CO2 plays no role in that process.

The World Meteorological Organization – another emanation of the United Nations and which is also, like the IPCC, an intergovernmental forum – declares 2016 the year the warmest of history. Knowing that 2016 is supposedly hotter by 0.02°C than 2015 and that the margin of error on this value is 0.1°C, we see the absurdity of this statement. For those who don’t understand, this means that the variation in temperature can be of + 0.12°C (global warming) or -0.08°C (global cooling). In short, we can’t say anything and WMO has simply lost its mind.

No, ‘climate change’ hasn’t led to an increase in tropical diseases

Climate-related diseases are relatively rare; and even malaria does not directly depend on the climate, but rather on the way we enable the parasite to reproduce and the mosquito to flourish in the place where we are located. If you find yourself in a swampy area, the odds you will get malaria are high; if you have drained the system and you no longer have that wetland, the odds you will catch the disease are very low. In the end, automatically blaming the resurgence of some disease on climate change comes down to removing the personal responsibility from the people involved: such as denying that their refusal of vaccinations, for instance, or their lack of hygiene, may be part of the problem.

Again, CO2 is greening the planet. And that’s a good thing. So stop demonizing it!

Present deserts, far from expanding, are receding; and they are receding due to the higher quantity of CO2 available in the air. It turns out that greenhouse operators voluntarily inject three times as much CO2 in the commercial greenhouse as it is present in the atmosphere. The result we can observe is that plants grow faster and are bigger, that they are more resistant to diseases and to destructive insects, and that their photosynthesis is way more efficient and that they, therefore, consume less water. Similarly, the rise of CO2 level in the atmosphere makes plants need less water so they can afford to colonize arid regions.