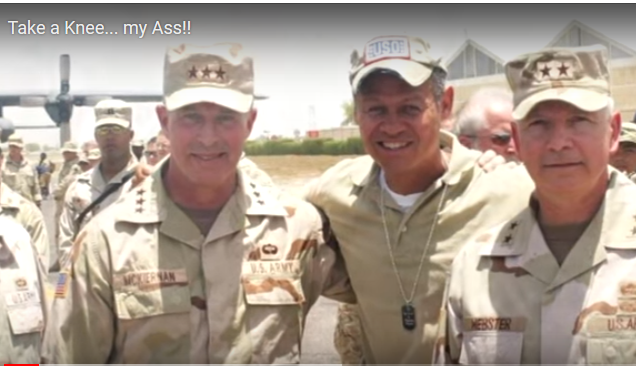 Country music singer Neal McCoy takes a jab at former San Francisco 49ers quarterback Colin Kaepernick and others who protested the national anthem by taking a knee in his newest single he debuted last week.

The song, “Take a Knee, My Ass (I Won’t Take a Knee),” was performed in front of a small audience on Oct. 8th and shared online as a Facebook Live video, which has since gone viral.

“When I see someone on TV take their stand by bending their knee, whether it be on astro turf or grass,” the lyrics say. “I think of those whose freedom was not free, and I say: ‘Take a knee – my ass!’”

The song, which McCoy notes was written by a friend of his, cites the armed forces as a reason why he proudly stands for the national anthem.

“I’ve been on 15 USO tours,” McCoy explained to reporters. “I’ve entertained our troops in Pakistan, Afghanistan, Iraq, and all over the world.”