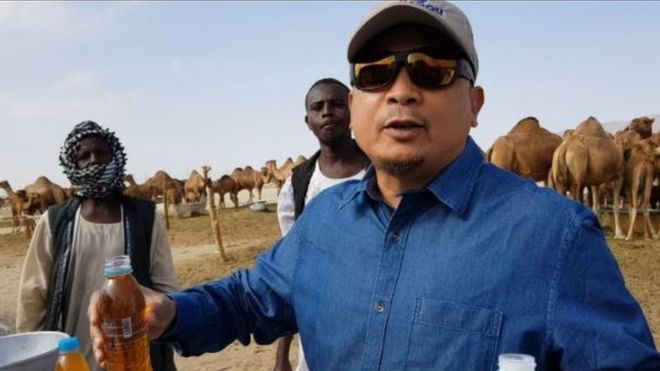 Nothing beats a tall glass of camel piss on a hot day.

A video of an Islamist leader purportedly drinking a mixture of camel urine and camel milk in Saudi Arabia has sparked debate over the health dangers of the practice in his native Indonesia.

In the video, Bachtiar can be seen pouring the amber-colored content of a plastic bottle into a bowl, combining it with a white liquid and then taking a sip from it, describing the flavor as bitter and rich. The video was shared on his Instagram page, where he has half a million followers, last week and it has since been viewed more than 200,000 times, sparking an online debate over the drink’s health benefits among all levels of Indonesian society, including politicians, as BBC Indonesia reported.

The Islamist cleric defended the consumption of the drink in the video caption, claiming the mixture of camel urine and milk has medicinal benefits. He quoted verses from the Hadiths, which record the traditions or sayings of the Prophet Muhammad and are second in authority only to the Koran.

But scientists in Muslim and non-Muslim majority countries reject the claims, and actually link the consumption of camel urine to the spread of a disease known as Middle East Respiratory Syndrome Coronavirus (MERS). The disease was first identified in Saudi Arabia in 2012 and caused the death of 36 people during an outbreak in South Korea in 2015.

According to the World Health Organization (WHO), the virus is transmitted from dromedary camels to humans, and as such it is advisable to avoid contact with the animals. “People should avoid contact with camels, drinking raw camel milk or camel urine, or eating meat that has not been properly cooked.