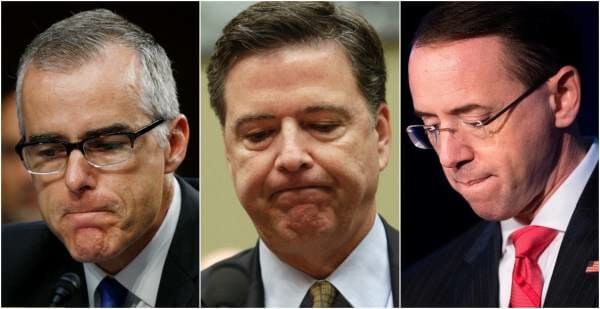 Capitol Hill sources on both sides of the aisle say the memo’s release is only a matter of time. And when it comes out, these current and former officials — all GOP bêtes noires — are likely to face even more criticism from the right over their involvement in FBI counterintelligence work.

Republicans, including Trump himself, have spent months attacking McCabe and Comey while special counsel Robert Mueller has been investigating Team Trump’s connections to the Kremlin. Rosenstein put that probe in place—a move Trump has derided as a witch hunt. […]

The Daily Beast‘s report comes amid the Sessions Justice Department calling on House Intelligence Chairman Devin Nunes (R-CA) to allow the FBI to review the memo to ensure its release will not harm national security.

While on the face on it, the Justice Department’s request is both logical and prudent. However, once in possession of the memo, which is likely to expose the role of top level FBI and Justice Department officials in using the Steele dossier to obtain FISA spy warrants, what do you think bureau officials will do? Wage a fierce PR campaign against it and the Republican lawmakers who demand the memo to be released.

The first leak is confirmation of what Republican lawmakers have been hinting to the press for over a week.

During an appearance on CNN‘s morning show “New Day” Friday, Rep. Chris Stewart (R-UT) told host Chris Cuomo  that the “essence” of the “shocking,” FISA abuse memo centers around whether or not the FBI and Justice Department provided false information to the FISA court for the purpose of obtaining spy warrants.

Rep. Matt Gaetz (R-FL) has hinted to Judge Jeanine Pirro that the memo outlines how the U.S. government may have committed fraud by presenting the courts with “false information,” to obtain FISA warrants.

“You’re aware as a Judge of the way evidence has to be authenticated and presented to a court to get a warrant,” said the Florida Republican.

“Of course, and prosecutors and investigators cannot perpetrate frauds on the court by presenting false information or information they know to be false,” Rep. Gaetz continued.

According to Fox News contributor Sara Carter, the contents of the memo are so “explosive,” that it could end special counsel Robert Mueller’s Russia probe. Additionally, the memo’s release could lead to the prosecution of top FBI and Justice Department officials, contends the reporter.