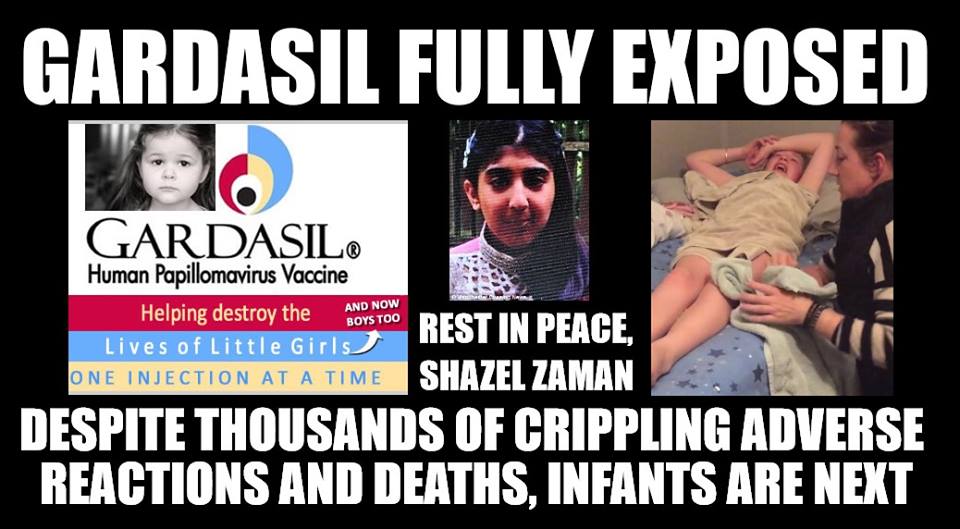 Florida lawmakers are now pushing a totalitarian medical police state law that would deny a public education to children who aren’t injected with the extremely toxic and risky HPV vaccine.

SB 1551, also being deceptively called the “Women’s Cancer Prevention Act,” mandates HPV (human papillomavirus) vaccines in school-aged children, revoking medical choice rights from parents and invoking state-sponsored coercion to force children to be subjected to extremely risky medical interventions, even against the wishes of their parents.

The HPV vaccine has been know to cause some of the worst adverse side effects. According to Natural News, a boy was paralyzed from the neck down after receiving a Gardasil HPV vaccination. Don’t forget the “horrendous adverse effects” caused by HPV vaccines in Ireland after an Irish vaccine push damaged countless young girls. Pay no attention to the fact that Japan withdrew its support for HPV vaccines following widespread toxic effects that shocked the nation. And most of all, don’t you dare read anything about one of the developers of HPV vaccines, Dr. Diane Harper, who publicly blew the whistle on the toxicity, harm and health risks posed by HPV vaccines, saying: “If we vaccinate 11-year-olds and the protection doesn’t last … we’ve put them at harm from side effects, small but real, for no benefit. The benefit to public health is nothing, there is no reduction in cervical cancers, they are just postponed, unless the protection lasts for at least 15 years, and over 70% of all sexually active females of all ages are vaccinated.”

So what are they really forcing into the bodies of those who get the HPV vaccine? Vaccine mandates are, of course, entirely orchestrated by the pharmaceutical companies themselves. As described in this published scientific article called, “Pharmaceutical Companies’ Role in State Vaccination Policymaking: The Case of Human Papillomavirus Vaccination,” researchers uncovered the cold hard truth: Big Pharma is behind the state vaccine mandates, just as expected.

The bill states there would be procedures to exempt a child from receiving the vaccination. If we were truly free as we are so often told, a simple “no thanks” would be all the exemption one would need.

A sexually transmitted disease called human papillomavirus (HPV) is the only form of cancer known to be contagious, but what the medical community won’t tell parents of teenagers and preteens is that HPV is easily defeated by a normal functioning immune system. Of the 120 or more different strains of HPV, only about 15 are carcinogenic, and the HPV vaccines, which have never been proven safe or effective in any clinical trials, literally take a shot in the dark at a couple of these strains, much like the haphazard flu shot administered every year to tens of millions of unsuspecting victims of neurological poisoning.

Still, the CDC and rogue hacks and shills from Big Pharma use scare tactics to all but force-vaccinate girls as young as 9-years-old with sodium chloride and two versions of the dormant HPV cancers hidden in protein and genetically modified organisms.

“You won’t be able to have children if you get cervical cancer.” “You can catch cancer from having sex and die.” “The shot will make you immune to cancer.” “The shot prevents cancer.” “You wanna have children later? You better get this shot.” The propaganda is mind-blowing, and it unfortunately works. It convinces parents to do the unthinkable: have their little girls (and boys) jabbed with some of the most dangerous carcinogens on earth to “prevent” a couple of strains of a rather benign, pre-cancerous STD. It doesn’t even make sense. What’s even worse is that the HPV vaccine’s protection effect wears off after a few years (as does the cancer itself under normal immune conditions), so what’s the use of taking the risk of getting jabbed with all these neurotoxins? Just how young are kids becoming promiscuous enough to worry about STDs anyhow?

More than 10,000 adverse events have been reported from victims of the HPV scam, including blood clots in the heart and lungs, anaphylactic shock, loss of muscle use and seizures. Most infections from HPV are benign and cleared rapidly by the human immune system and never progress to cervical cancer, or even precancerous lesions of the vagina, vulva or anus. No valid reason for administering the HPV vaccine has ever even been established.

Why are HPV vaccines, like Gardasil (made by Merck) and Cervarix (made by GSK) so dangerous? Answer: They’re made with “denatured” forms and fragmented strains of the virus, meaning the virus is weakened and can remain dormant for months, if not years, so if you do get the virus later, who’s to say you didn’t get it from the vaccine itself? No studies on this have ever been conducted, nor will they likely ever be. Plus, Gardasil contains aluminum, sodium chloride, polysorbate 80 and l-histidine, the latter of which interferes with the brain’s defenses against metal toxins. That means the aluminum has a heightened chance of crossing the blood/brain barrier. Got brain damage? No wonder. The following are just four examples of the hundreds (if not thousands) of girls permanently damaged by HPV vaccines.

Caroline is now 15 years old. She used to run, cycle and play football. At 13 years of age, two nurses force-vaccinated Caroline with Gardasil (one nurse literally held her down while the other stuck the needle in her), even after her mother had given notice that if she did not want it, she must not be given it. Within a few days, Caroline’s face became paralyzed. Doctors blamed Caroline’s condition on the fact that she was grieving her grandmother who had died six months earlier. Caroline only got one of the three recommended HPV jabs. She now feels pain throughout her body, suffers from poor memory and heart palpitations, and has breathing difficulties. She can’t walk or cycle much or her legs go weak and lose feeling. She is mostly bedridden. The nurses responsible have visited her home and told them not to ever mention the vaccine in connection with Caroline’s health problems or they will scare other children.

Back in November of 2014, Laura, a now 15-year-old girl living in Michigan, was a healthy, straight-A student and avid volleyball player. After the first Gardasil shot she got her first period, then never got a period again. After a second HPV jab, severe headaches kicked in, then constipation, nausea, brain fog and extreme abdominal pains, as attested by Laura and her parents. While Laura was sick from the first two toxic jabs, their “trusted” pediatrician conned and “guilted” them into getting a third HPV injection for Laura in order to further “protect her from cancer.” The doctor said, “While you’re here, you might as well get the third.”

Then, after the third toxic Gardasil jab, Laura’s skin turned a greenish-hue, her hair started falling out and she started experiencing intolerable muscle spasms to the point where she could no longer play volleyball. Her legs went weak like “Jello.” After the third jab, Laura was hospitalized for a full week, and her parents consulted seven doctors, who administered MRIs and CAT scans and prescribed anti-seizure medication. The doctors, according to the family, were rude and all denied any link to Gardasil.

One doctor went so far as to tell Laura that her severe health problems were “all in her head.” Since then, the family has completely stopped vaccinating all of their children and changed over to a doctor that does not push vaccines. Laura’s father, who is a school principal, is very angry about the whole extended health nightmare, saying, “You don’t know until something happens to you.”

Case III: Sydney Weggen of Iowa got the Gardasil jab in conjunction with Tdap vaccine, became anemic and one of her lungs filled with fluid

Sydney used to dance five hours a day, but can no longer dance at all. At just 11 years of age, she received three Gardasil STD jabs just a few months apart. After spending $20,000 on medical tests, losing over 20 pounds and getting a stint put into her lung to drain fluid and keep it functioning, Sydney almost died.

The film VAXXED, produced by Del Bigtree, tells the story of the biggest medical scandal and cover-up in U.S. history regarding the dangers of vaccines. The film crew continues to interview parents and children who suffer from vaccine injuries and want to tell their stories to the world to help protect others from similar nightmares. One mother tells the story of the biggest regret of her life: allowing her teenage daughter Kate to receive the Gardasil HPV vaccine, here.

Want to build up natural immunity to cancer? Check out medicinal mushrooms like reishi and chaga, as well as garlic, vitamin C and D3, oil of oregano, licorice root, and of course, hemp seed oil. It’s all natural and perfectly legal, with no side effects!