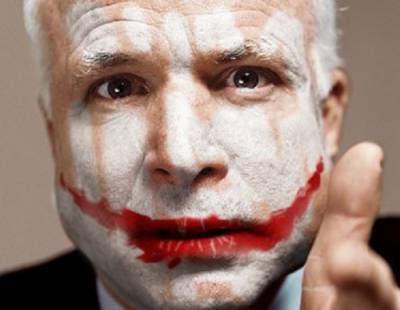 John McCain, who trafficked the fake Trump dossier to the FBI, makes bizarre claim about FISA memo release: “We are helping Putin”

(Natural News) There is one thing we can deduce from Friday’s release of the infamous “FISA memo,” thanks to heroes and champions of government accountability and transparency in Congress and the White House: It’s now confirmed that the Obama administration was the most corrupt in the history of our country.

But they’re not the only enemies of government and political accountability. Not by a long shot. In fact, one of their best allies is in the U.S. Senate, and — technically speaking anyway — he’s not even a member of their party.

That would be Deep Statist Sen. John McCain, RINO-Arizona. Rather than cheer the release of the memo, which revealed serial abuses of the Foreign Intelligence Surveillance Court by upper echelon officials in the FBI and Justice Department to prevent Donald J. Trump from becoming president, and to undermine him after he defeated Hillary Clinton in November 2016, he criticized it.

“The latest attacks on the FBI and Department of Justice serve no American interests – no party’s, no president’s, only [Russian President Vladimir] Putin’s,” McCain said in a statement. “Our nation’s elected officials, including the president, must stop looking at this investigation through the warped lens of politics and manufacturing partisan sideshows. If we continue to undermine our own rule of law, we are doing Putin’s job for him.”

Why would he do that? Well, for one, McCain is a #nevertrumper; ever since the president insulted his Vietnam service, most of which was spent in a brutal North Vietnamese prison, the senior Arizona senator has had it in for Trump. (Granted, Trump shouldn’t have done that, but lest we forget, McCain had already begun savaging his presidential bid, so our president — always the counter-puncher — hit back.)

For another, let’s not forget that McCain gave his Deep State buddy former FBI director James Comey a copy of the bogus “Trump dossier” — the same one that was misrepresented as “intelligence” and used to secure an October 2016 surveillance warrant from the FISA court so the bureau could spy on the Trump campaign.

As reported by The National Sentinel:

…[A]s many suspected, the discredited and unverified “Trump dossier” was used not once but on three separate occasions to secure a FISA court surveillance warrant to allow the Obama administration to spy on Team Trump during his campaign.

As Fox News added, the FISA memo also “includes testimony from a high-ranking government official who says without the infamous Trump dossier, the FBI and DOJ would not have secured surveillance warrants to spy on at least one member of the Trump team.”

The memo further pointed out that in December 2017, then-FBI deputy director Andrew McCabe testified that “no surveillance warrant would have been sought” from the FISA court “without the Steele dossier information.” (Related: SHAMELESS: No Democrats or left-leaning publishers denounce shocking abuses of power detailed in FISA memo release)

So Obama could spy on the presidential nominee of his own party.

“The ‘dossier’ compiled by Christopher Steele (Steele dossier) on behalf of the Democratic National Committee (DNC) and the Hillary Clinton campaign formed an essential part of the Carter Page FISA application,” the memo states.

“Steele was a longtime FBI source who was paid over $160,000 by the DNC and Clinton campaign, via the law firm Perkins Coie and research fir Fusion GPS, to obtain derogatory information on Donald Trump?s ties to Russia,” it continued.

How likely is it that McCain — still butt-hurt over Trump’s insult — didn’t know the dossier was a political document, that it was just opposition research and not actual intelligence?

Which means Deep Statists like you are helping the enemy — not Trump.

Read more of J.D. Heyes’ work at The National Sentinel.