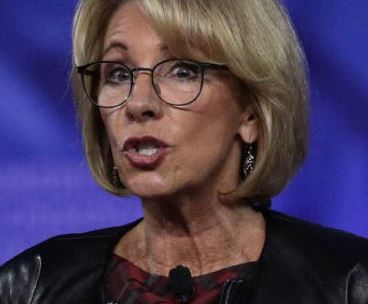 Department Of Education: We’re Done Being Involved With Transgender Students And Bathrooms

The Department of Education has decided it will not investigate or interfere if transgender students complain they are barred from bathrooms that match their chosen gender, according to Buzzfeed News.

On Thursday, Buzzfeed asked Liz Hill, a spokesperson for the Department of Education, if restroom complaints from transgender students are not covered by a 1972 federal civil rights law called Title IX. Hill answered, “Yes, that’s what the law says,” adding on Friday, “Title IX prohibits discrimination on the basis of sex, not gender identity.”

Hill made it clear that some complaints by transgenders students will indeed be investigated, but bathroom complaints will not be among them. She stated, “Where students, including transgender students, are penalized or harassed for failing to conform to sex-based stereotypes, that is sex discrimination prohibited by Title IX. n the case of bathrooms, however, long-standing regulations provide that separating facilities on the basis of sex is not a form of discrimination prohibited by Title IX.”

No formal announcement of the Department’s decision has been made.

Title IX of the Education Amendments of 1972 states that discrimination is forbidden on the basis of sex. The word “gender” is not included in its language:

No person in the United States shall, on the basis of sex, be excluded from participation in, be denied the benefits of, or be subjected to discrimination under any education program or activity receiving Federal financial assistance.

Advocates for the transgender community claim that the text of the law, by using “sex,” is ambiguous, thus allowing them to claim that sex can also refer to “gender.”

In May 2016, the Obama administration issued guidance stating Title IX guarantees transgender students can use restrooms and other school facilities matching their gender identity. In February 2017, the Trump Administration rescinding Obama’s guidance, asserting it would “more completely consider the legal issues involved.”