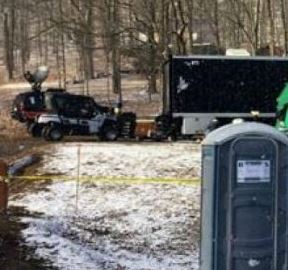 Treasure hunters on the trail of a lost Civil War gold shipment claim they have discovered the fortune in a remote location of Pennsylvania, but state and federal authorities have blocked them from digging it up, reports say.

The treasure hunters, calling themselves Finders Keepers, claim to have found the gold buried in a state-owned forest at Dents Run, 135 miles northeast of Pittsburgh. However, state officials have denied permission for the group to dig at the location, the Associated Press reported.

Still, authorities appear to take the claims seriously because on March 13, state officials and the FBI accompanied the group to Dents Run and set up a post. Neither authorities nor the treasure hunters are revealing what is transpiring, however. Indeed, Finders Keepers owner Dennis Parada insisted the FBI had him under forced silence.

The only public comment by the FBI is that it is conducting “court-authorized” activity with its participation in the mysterious activity.

Finders Keepers has been chasing the legend of the lost Gettysburg gold shipment for some time. Rumor has it that President Abraham Lincoln sent 52 bars of gold — some tales set the number at 26 — toward the Harrisburg area in 1863 to be used to pay his soldiers.

But somehow en route from Wheeling, West Virginia, the wagon carrying the precious cargo was attacked, and the gold disappeared. The wagon, along with a contingent of dead federal soldiers, was later found, but the gold had vanished. The last time the wagon and its escort were seen was in St. Marys, Pennsylvania.

The shipment would be worth up to $55 million today.

According to WJAC, in 2012, Finders Keepers claimed it tracked the gold to an area in Dents Run but could not come up with the $15,000 bond the state had demanded to begin digging.