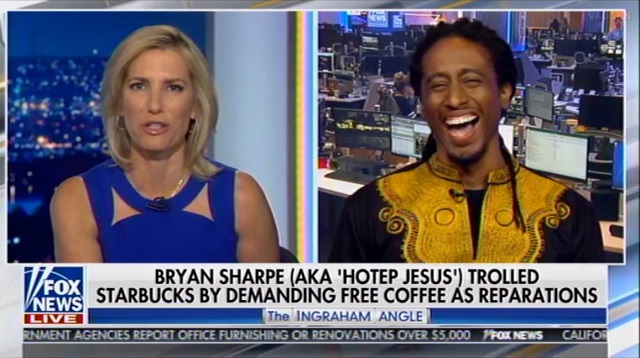 Sharpe, who goes by “Hotep Jesus” on Twitter, filmed himself visiting Starbucks and asking for a free coffee as “reparations” for their “racism.”

“If I didn’t know better… you sound like Chris Rock,” Laura Ingraham told Sharpe. “It’s so funny and that poor girl in Starbucks is ready to turn over the keys to the shop to you!”

“Why did you do this?” Ingraham asked.

“I am sick and tired of liberals using black people and making us look like victims, making us look soft with their liberal dogma,” Sharpe said. “It is disgusting.”

“The other thing I hate about liberals is if you’re a black man, as I am, in America they will not hand you a microphone unless you follow the liberal narrative, and I said, you know what, I bet if I go into Starbucks and I follow a liberal narrative I’ll make the news — and voilà here I am!” Sharpe said.

Sharpe told The Blaze on Wednesday he trolled Starbucks with his “reparations” stunt to show that “racism is a business.”

“Thanks to the ridiculousness of BLM activists, it’s the new publicity stunt — and I think I just proved it,” Sharpe said.

Watch the full video of his viral troll below: