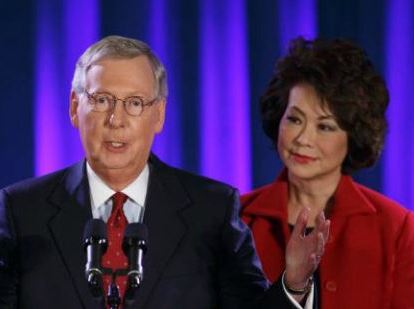 Foremost Group, which is owned by Sec. Elaine Chao’s father and Sen. McConnell’s father-in-law James S.C. Chao, signed contracts with a subsidiary of the state-owned China State Shipbuilding Corporation (CSSC) for four bulk cargo ships in June and September 2017. In December 2017, Chao’s company signed another contract with state-owned CSSC at Foremost’s New York office for two massive 210,000-ton ships. James S.C. Chao and two of Elaine’s sisters were in attendance. So, too, was the Consul General of China in New York, as well as representatives from the CSSC. The financial terms of the agreement were not disclosed. Then on January 31, 2018, Foremost Group ordered four more 210,000-ton ships from CSSC. Angela Chao, sister to Sec. Elaine Chao and Foremost’s Deputy Chairman, said she expects cooperation between the two entities to extend into the future. In January 2017, Angela Chao joined the board of the state-owned Bank of China.

The finances of Sec. Elaine Chao and her husband, Sen. Mitch McConnell, are closely tied to the Foremost Group. In 2008, James Chao gave a $5 million-$25 million “gift” to Sen. McConnell, more than tripling his net worth. Contracts with other Chinese state-owned enterprises make up a significant portion of Foremost’s business. James and Angela Chao previously served on the board of CSSC Holdings, a major contractor for the Chinese military and a key supporter of the PLA Navy.

Despite increasing threats of a trade war between the Trump Administration and the Chinese government, the Chao family’s ties to the Chinese government do not seem to have cooled. To the contrary, as the 10-ship order suggests, they have accelerated. Moreover, James Chao was recently in China for an event promoting his new Chinese-language biography. The event was sponsored by Xinhua, the Chinese state-owned media outlet, and the Chinese People’s Association for Friendship with Foreign Countries (CPAFFC), a branch of the Communist Party known to be active in foreign influence operations. Sponsors praised James Chao as a great promoter of China abroad, referring to him as “vanguard of China-US exchanges.”

The Chao’s Chinese counterparties are often closely aligned with China’s foreign policy elite. CPAFFC President Li Xiaolin, attended the book event with the Chao’s. She is the daughter of a former Chinese president and wife of a former Major General in the People’s Liberation Army (PLA). Another official in attendance now serves as Deputy Director of the United Front Work Department, a division of the Communist Party involved in managing foreign relationships.

Trade and infrastructure deals around the globe have become a centerpiece of China’s foreign policy in recent years. These deals are part of the strategic “One Belt, One Road” initiative, a massive plan to expand China’s sphere of influence across Asia and Africa. U.S. analysts view OBOR as both a military and economic challenge to the United States. One detailed study regards it as a “state-directed effort to bolster Chinese political influence and extend its military reach from Indonesia to East Africa.”

But the Chao family describes it in much more benign terms. In a March 2017 statement, Angela Chao called OBOR “very important not only to China’s development, but for the many surrounding and neighboring countries, and thus the world….I hope to also be able to contribute to this important initiative that has the potential to raise the standard of living for so many.”

The United States has so far declined to participate directly in OBOR or join China’s Asian Infrastructure Investment Bank (AIIB). However, the Trump Administration sent a delegation to the 2017 Belt & Road Forum in a notable deviation from previous policy. Elaine Chao’s position as Transportation Secretary gives her great influence over U.S. policy regarding central components of the plan. Secretary Chao is spearheading the Trump administration’s $200 billion infrastructure proposal.

Foremost has yet to disclose the financial details of its latest deals with CSSC. Similar transactions with CSSC have recently cost over $47 million per vessel, a price that would place the total value of the Foremost deals at nearly half a billion dollars. Under current federal disclosure laws, which do not apply to adult relatives, Secretary Chao and Senator McConnell are not required to report their family’s dealings with a major foreign military contractor. Secretary Chao is known to be extremely close with her father, who claims that she calls him nightly and involves him in official administration events “as often as she can.”