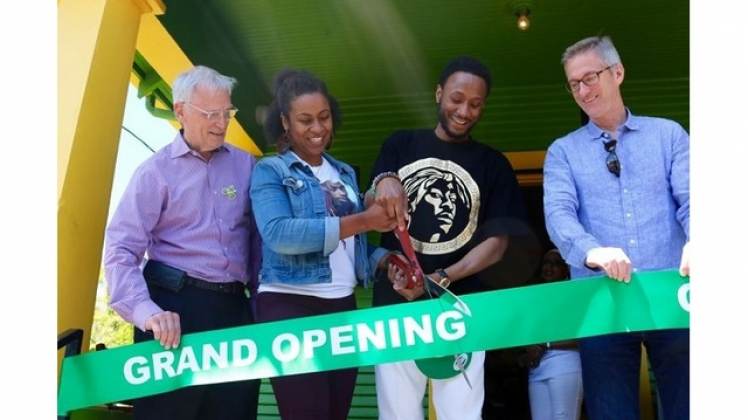 In an effort to combat racial stereotypes, the government is giving welfare to black folks for drugs and rap music. No, it’s not a Dave Chappelle skit, it’s real. In the above picture, congressman Earl Blumenauer and Portland mayor Ted Wheeler celebrate the opening of Green Hop with owners Nicole Kennedy and Karanja Crews. The “marijuana dispensary

Local officials and statewide dignitaries hailed the opening of a new marijuana dispensary in North Portland as a welcomed step for African Americans too often locked out of economic opportunities.

“This is more than a store. It’s a representation of equity,” said Karanja Crews, co-owner of the Green Hop pot shop located at 5515 N.E. 16th Avenue, during a ribbon cutting ceremony on Saturday, June 16.

Saturday marked what would have been the 47th birthday of the late rapper Tupac Shakur — an appropriate date for an event billed as opening of the world’s first hip hop dispensary. The space is festooned with vinyl records by “2Pac” as well as Nas, Wu-Tang Clan and A Tribe Called Quest.

Freshly coated in green paint and yellow trim, the two-story craftsman home in the Vernon neighborhood has been restyled with signs promising “420” deals and an apparent “Garden of Weeden” inside the storefront just a half-block from Northeast Killingsworth Street.

Many politicians praised the entrepreneurial spirit of Green Hop’s two young African American co-founders, Crews and nurse and teacher Nicole Kennedy, for fighting against the current of gentrification and racial discrimination.

“Less than one percent of this industry — that’s going to be larger than the NFL in five years — is African American,” noted Rep. Earl Blumenauer. “Nothing makes me feel better than watching you open this establishment.”

“This is the will of the people in this state… and this industry needs to be treated the same as any other,” added Mayor Ted Wheeler. “The City of Portland will be here with you 100 percent.”

A $96,000 city grant distributed via Portland Opportunities Industrial Center will create the Green Hop Academy Program, an apprenticeship open for African American young people, ages 21 through 24, who are interested in working in the marijuana business.

The ring of the cash register means more revenue generated by the city’s three percent recreational marijuana tax that was championed by Commissioner Amanda Fritz.

Willamette Week continues to pour on the fluff:

“Hip-hop has taken the brunt of the backlash to controversial music genres,” Kennedy says. “There’s a lot of stigma around it, and its content is more policed than other genres—just like cannabis.”

The thread that connects hip-hop and cannabis is one of misunderstanding and social condemnation. It also reflects the story of Portland’s black community, and the North Portland neighborhood where Green Hop now resides.

With Green Hop—which celebrates its grand opening this week—Crews and Kennedy are bringing a piece of that culture back to the neighborhood. Inside the converted green and yellow Craftsman home, vibrant graffiti murals cover the walls, and classic records from Nas, A Tribe Called Quest and Dr. Dre are on display. Strains even have nicknames like Illmatic and Grandmaster Flowers. For the two owners, the “hip-hop pot shop” concept has less to do with marketing than paying homage to the artists who inspired them.

Kennedy, who has worked as a nurse and medical assistant for the past decade, became fascinated by the medical potential for cannabis. Kennedy also taught nursing classes, and met Crews while attending his unique local teaching conference, Teaching With a Purpose. The conference draws hundreds of educators to Portland every October, and always features scholars, workshops and concerts with artists like GZA of Wu-Tang Clan. They quickly discovered a common interest in opening a dispensary, which they believed could help reintegrate the black community back into North Portland.

As soon as a business plan began to form, they saw an opportunity to incorporate vocational training to further assist young people of color in finding employment. They created the Green Hop Academy, an internship program in collaboration with POIC, a nonprofit that mentors at-risk youth. GHA teaches young people of legal smoking age employable skills in the cannabis industry, through classes that include certification by the Sativa Science Club. Some of Crews’ former students have enrolled and since graduated from the program.

When I got word that (A) there’s a new Black-owned cannabis business in town and (B) it’s the “first historical hip-hop dispensary” in the country, my first thoughts were, “How in the hell has no one else done this yet?” and, “Aw, how cute and special and dope that this is happening in Portland.”

“I admire Green Hop’s commitment to supporting African American youth in developing the skills and expertise needed to thrive in the cannabis industry, and share their goal of increasing the participation and success of people of color in an otherwise white-dominated field,” Commissioner Fritz said in a press release.

“The link between hip-hop culture and the normalization of cannabis is a natural partnership,” said Mayor Wheeler. “Green Hop dispensary’s mission to promote community health and wellness, and increase economic opportunities for people of color is something the City of Portland wholeheartedly supports.”

While city officials are making an effort to foster a positive and mutually beneficial relationship with the hip-hop community, KC adds that there’s still work to be done before equity is achieved.

Situated in a green-and-yellow house with an interior decked out with vibrant graffiti and iconic albums, the Green Hop collective hopes to be a constant reminder of the artists who paved the way for legalization by normalizing the consumption of dope through hip-hop music and culture. KC specifically cites rappers like Snoop Dogg, Dr. Dre, Nas, and Tupac, who unapologetically smoked cannabis in the 1980s and 1990s.

“We’re just trying to pay homage,” KC says, adding that in the future, he’d like to have greats like Nas, Redman, and Method Man perform at one of their block party concerts.

Green Hop recently partnered with Portland Opportunities Industrial Center and won a grant to assist in their Green Hop Academy Program, which provides apprenticeships for African Americans aged 21 to 24 who are interested in working in the cannabis industry. The team says they’re excited to create opportunities for more people of color, including jobs, internships, apprenticeships, and more.

Green Hop is already creating strong ties with the local hip-hop community. On August 18, the dispensary will host the Green Hop Fest Block Party, and KC’s already gotten hip-hop duo Dead Prez to commit. Recently Green Hop signed on to be a sponsor for the Thesis monthly hip-hop showcase at Kelly’s Olympian—they’ll hook showgoers up with deals and goodies this Thursday.