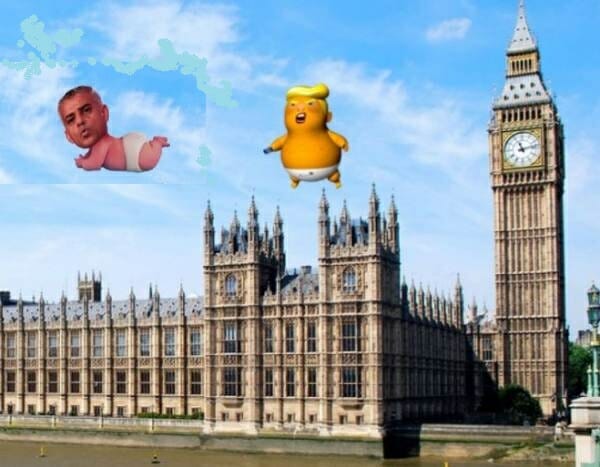 The Muslim Mayor of London, Sadiq Khan, approved an ‘angry baby’ Trump blimp to fly near the Parliament for two hours on July 13th during the President’s visit to the United Kingdom.

Ironically, the group behind this angry baby Trump blimp refer to themselves as ‘anti-fascists.’

Sadiq Khan’s spokesman said the Mayor approved the blimp because he supports the right to peaceful protest. A counter group is raising money for a Baby Khan balloon to fly over London with the Baby Trump blimp next week.

The group has already raised over £14,000!
Westmonster reported:

Following Sadiq Khan’s approval of a balloon mocking President Trump to be flown over Parliament during his visit to the UK, a counter-campaign has surged to over £10,000 out of nowhere for a balloon depicting the London Mayor to go up.

The campaign’s appeal reads: “To have a giant size Sadiq Khan, ‘Baby Khan’ balloon fly over London to demonstrate our unhappiness with him as our Mayor of London.”

It goes on to explain: “In light of the Donald Trump ‘Baby Trump’ ballon being allowed to fly over London during his visit to the UK, let’s get a ‘baby Khan’ one and see if FREE SPEECH applies to all and whether or not Mr Khan and the London Assembly will also approve this.”

More than 600 people have backed the move already, to the tune of more than £10k.

You can donate here.