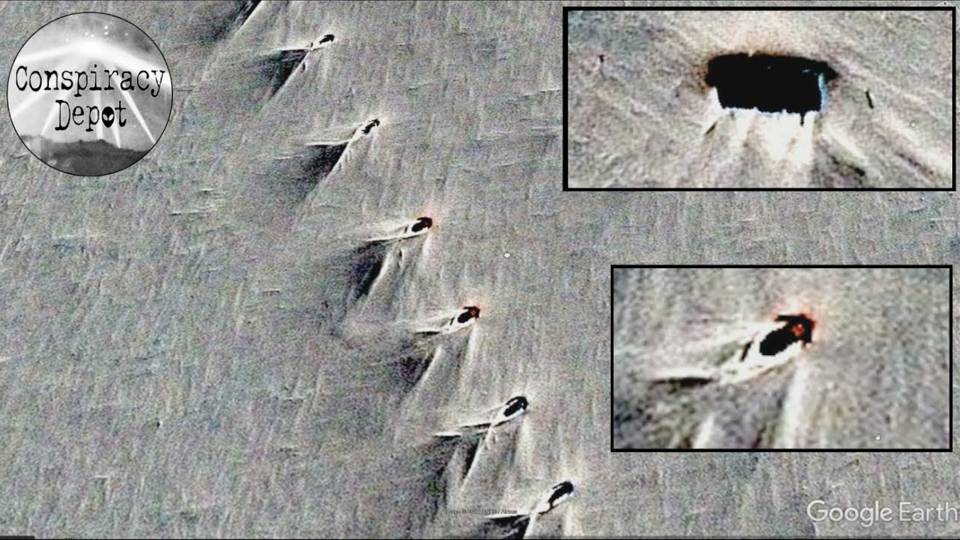 A Two kilometre long series of 22 sinister-looking structures have been revealed by thawing ice in Antarctica – prompting claims the installation is a World War 3 fall out shelter for the global elite or a landing pad.

Experts say the bizarre looking series of  structures is the size of a small town – and appears to have been buried for years.

To the north of the settlement deep inside Antarctica, – where temperatures can dip to -130F (-90C) – there appears to be an airstrip and the whole area is covered with what seem to be vehicle tracks.

According one researcher into the unexplained the nearest official scientific research station is Troll, a Norwegian research station located at Jutulsessen, 200 miles north east of the structure near Princess Martha Coast in Norwegian-claimed Queen Maud Land.

He said: “I assume they are related to some man-made activities for research purposes but I’ve looked at the co-ordinates and I’ve looked on a number of sites for all known research stations in Antarctica and the closest one is Norwegian station 200 miles away.”

Fellow paranormal investigator going by the name Florida Maquis – who claims to be a former agent in the US Military Intelligence Corps – discovered something even more bizarre by looking back at the same Antarctic area year-by-year.

The installation – whatever it is – remains invisible until about 2001 when melting ice starts revealing the first indications of a buried site.

He said: “This is about as creepy a place as I’ve ever seen in my life.

“What we have is a runway and an operations centre of some kind.

“I did some basic measurements and whatever these things are protruding through the snow they measure just shy of 2000 metres.”

The discovery triggered an avalanche of conspiracy theories both on YouTube and forums with one contributor suggesting the installation was a nuclear  bunker for the world’s rich and powerful elite, another that it is an ancient alien landing site now being thawed out for invasion.