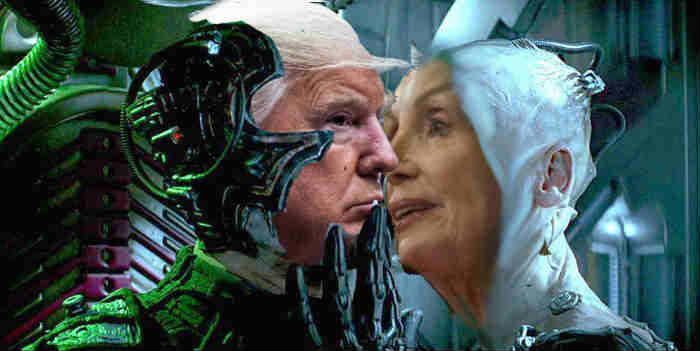 I am a Star Trek fan, like millions and millions of others on the planet. In later versions of the franchise, the great threat to the star fleet and the Federation was the Borg. The Borg, if I remember correctly, was about the collective—that total lack of individuality among beings and a complete lack of liberty for those civilizations that had been conquered. If one did not submit, then elimination of that civilization was the obligation of the Borg. Their goal was perfection. Does any of this sound familiar in any way?

On the Far Left, we encounter a mentality that is eerily similar to that found in the fictional Borg. The Far Left requires all adherents to be part of the collective and any variance is not tolerated. If one opposes the Far Left, then one must brace for a full-throated attack focused on personal destruction (I have personal flight test data on this point).

.The Far Left, after mutilating Darwinian theories, seeks the perfection of man and all things associated with man. This can only be done if there is an intellectual elite that control everything. This is why the Far Left has worked so hard to control everything from reproduction to climate change to education.

This single-mindedness of the Far Left is fueling their efforts to shift voting patterns away from usual conservative strongholds. Their use of technology, funding levels, and dedication to putting people on the ground in all contested areas shows that they are serious about winning elections, regardless of what it takes.

The Far Left (the Borg) has come out of the closet and is openly advocating for changing our free market system for an economy based on socialism. I have a hard time getting my head around how a person—or collective—could think that socialism is a better way to distribute resources, but I was not raised or educated by people who suppressed individual achievement and merit based societal norms. I never received a participation trophy. I either won or I didn’t. I learned a lot from both outcomes.

I know there are professors who do not believe in giving grades as doing so differentiates one individual from another based on merit. I know a lot of students who wish professors didn’t give grades because if everyone got the same grade, there would be no reason to work hard to achieve. I cannot comprehend a system in society that does not reward individual talents and achievements. If we deny opportunity, then we ought to make sure that everyone has equal opportunity. It is unconscionable that anyone would advocate for equal outcomes, regardless of effort expended.

The welfare state and socialist redistribution schemes demoralize and debase a society. When the distribution of scarce resources is left to the elite few, there will always be injustice and a moral vacuum. If individuals are allowed to achieve to their own ability and to earn to their own potential, there a market system is a much more efficient means of distribution. The Far Left (Borg) cannot allow such individualism.

Sam Clovis was raised in Kansas and attended the United States Air Force Academy, serving for 25 years on active duty as a fighter pilot.  He retired as a Colonel and the Inspector General of NORAD and the United States Space Command.

Sam served as a Fellow at the Homeland Security Institute, contributing in national preparedness and immigration policy.  He recently served as a tenured full professor of economics at Morningside College.

Sam has a BS from the Academy, an MBA from Golden Gate University and a doctorate from the University of Alabama.  He served as national co-chair and chief policy advisor for the Trump for President Campaign, was a policy director during the transition period and served as the Senior White House Advisor to the US Department of Agriculture.  He currently lives in rural Iowa.