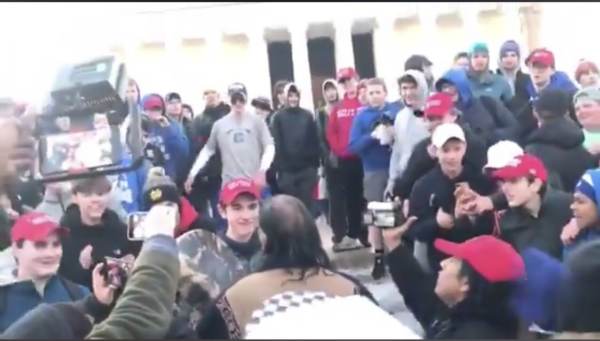 BuzzFeed and the hateful left-wing media is at it again — these MAGA teens were doxxed and are now in fear for their lives!

On Friday, a group of high school boys from Kentucky went to the Lincoln Memorial after attending the March For Life.

While standing at the memorial a Native American activist, Nathan Phillips, approached the boys and started harassing them.

Phillips, reportedly a Vietnam veteran, got up in one boy’s face and started screaming and beating his drum inches from the boy’s face.

Phillips also has a history of setting up similar incidents.

According to one of the high school boys who was present, a group of black men were taunting the Trump supporters, calling them “shooters” and “crackers” and said the white kids “had everything given to them by their parents.”

According to a witness, it was at this point that a Native American man showed up “out of nowhere” and began drumming in the high school kid’s face.

“We weren’t even chanting at him, we were chanting at the African American guy, but obviously social media made us look bad to get views and stuff,” a witness said.

Video of the black men harassing the teenage Trump supporters:

That same group of MAGA kids get harassed by group of Black Men at March for Lives and noone says anything.
They even harass the one black kid for being friends with white people…
Where is the outrage? pic.twitter.com/s9vkJ4AXk5

Video shows the children were not chanting, “Build the wall!” as Nathan reported.

The media isn’t interested in facts — they want to push their left wing agenda so they doxxed the high school kids.

The high school boy was doxxed by the liberal fascist mob.

The children have received death threats by violent leftists following this incident.

On Saturday one of the Catholic boys wrote the local radio station in Kentucky and BEGGED the station to report the truth and not join the far left media lynch mob.

Now this…
Several of the pro-life boys are not only receiving death threats but may be expelled over the lies of the liberal media.

VOTE NOW: Should Trump keep the Government closed until he gets the wall?

Let’s hope the kids take him up on it.
Robert is selective about the people and incidents he will represent.

I will represent the kids for free if they want to sue @maggieNYT for obvious libel. https://t.co/VmqVqIVNoe