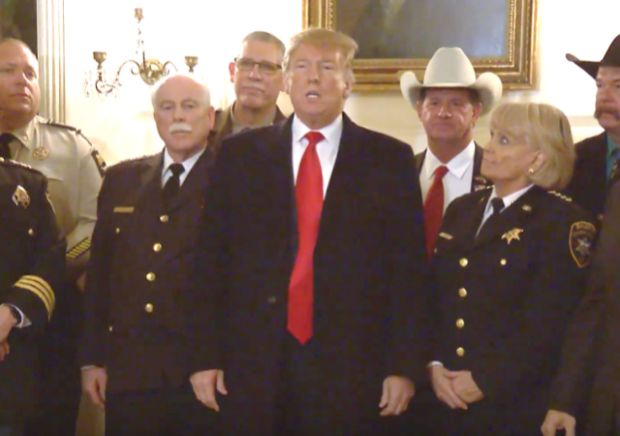 “This dangerous congressional proposal not only jeopardizes the risk of our national security, but hinders our law enforcement officers from effectively enforcing and upholding the law and protecting their communities.”

President Donald Trump, Vice President Mike Pence, and the House Freedom Caucus met with around 60 sheriffs from around the country as they demand a border wall and more ICE funding.

According to one sheriff, that would be a “catastrophe.”

Sheriffs took their demands for border security to lawmakers Monday morning, gathering at the Capitol to deliver a letter to Congress. pic.twitter.com/Se4oczHOIz

Sheriffs from coast to coast are waiting to get into US Capitol, will deliver strong message on border security funding to Congress as part of ⁦@NationalSheriff⁩ conference. pic.twitter.com/JoW680MFnG

Hodgson also said that if the policy passes Congress, the sheriffs will have to release people, which “could result in more crime.” He said this will put their “people at risk just to take care of their political agenda.”

Hodgson explained that Massachusetts is worried about border security due to “the state’s high opioid overdose rate and prevalence to fentanyl.” More from WGBH:

“One of the things I was able to point out at the press conference with the president was the fact that we cannot afford to have Congress dictating how many people we can arrest,” Hodgson told WGBH News. “That’s essentially what’s going on with this whole issue of Congress saying they’re going to limit the ICE beds. They’re going to try to restrict how many people ICE is going to be able to hold and then let the rest of them out into our communities to commit more crimes.”

“We as a state, we’re in as dangerous a situation in Massachusetts as anywhere else,” Hodgson said. He added, “We may not be immediately at the border, but we’re getting the immediate impacts of what’s coming across the drug traffickers, MS-13, the human traffickers. … Once you get through, you’re pushing this stuff [to] all of the United States.”

House and Senate immigration negotiators received letters from the National Sheriffs’ association and the Major County Sheriffs of America on Friday. From The Washington Examiner:

“This dangerous congressional proposal not only jeopardizes the risk of our national security, but hinders our law enforcement officers from effectively enforcing and upholding the law and protecting their communities.”

The letters were provided to Secrets.

Most of those arrested inside the U.S. have criminal records, convictions and have been deported before. The sheriffs suggested that those released often never return for court dates.

“Capping the number of detention beds utilized by ICE not only jeopardizes the integrity of the immigration system, but would cripple ICE’s ability to detain criminal aliens and other aliens who pose a risk to public safety or are a flight risk,” said the two letters signed by Sheriff John Layton, president of the National Sheriffs’ Association, Sheriff Grady Judd, president of the Major County Sheriffs of America, and Sheriff Mike Bouchard, vice president of governmental affairs for Major County Sheriffs of America.