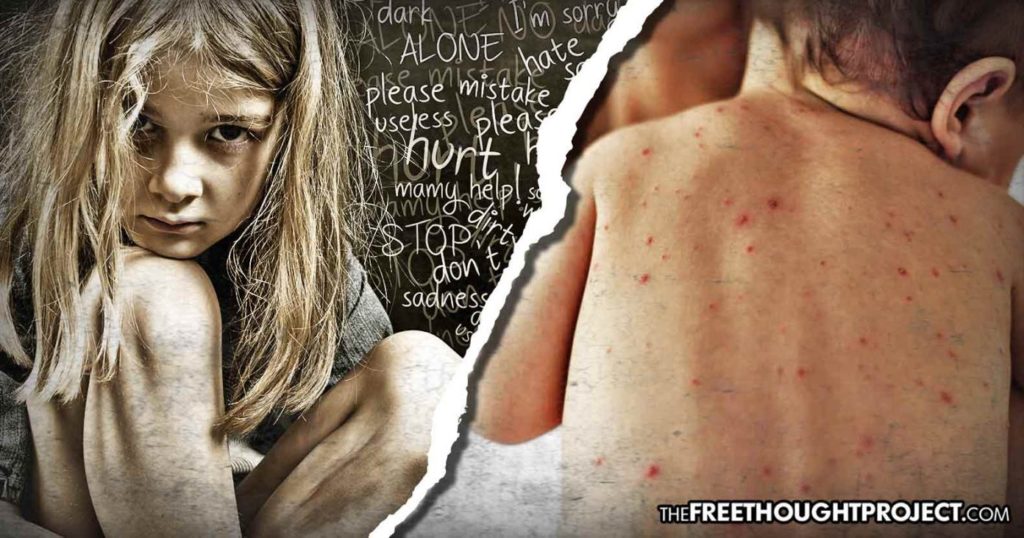 As Media Freaks Over 159 Measles Cases, Thousands of Kids Sold as Sex Slaves Out of Foster Care

If ever you needed a clearer example of the mainstream media’s intentions in this country, you just need compare the amount of coverage given to the 2019 measles non-crisis—used to bolster vaccine manufacturers’ bottom lines while calling for the silencing of those who advocate for vaccine safety—versus the 18,000 children who will go missing from government-run “protection care” this year—many of whom will be sold into sex slavery.

As the Google trend analysis below shows, the former received a ridiculous amount of coverage while the latter received almost zero. 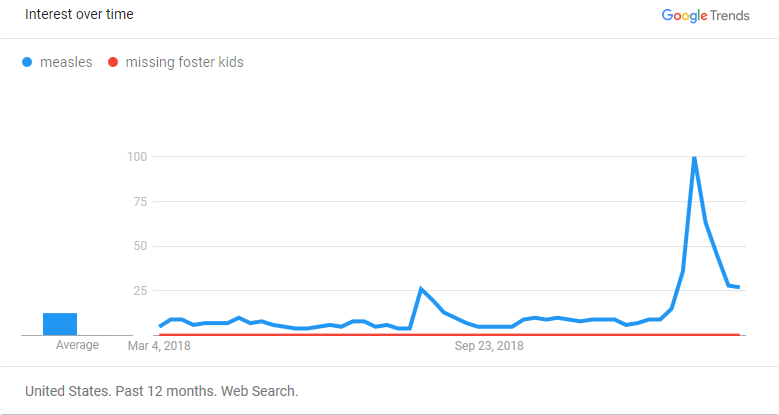 Unless you’ve been under a rock lately, you’ve probably noticed the utter hysteria over the measles “epidemic” being shoved down the collective throats of America.

If one were to unquestioningly buy into said hysteria you’d think a deadly epidemic is sweeping the nation and children are dropping dead left and right. But that’s simply not true and the reality is there is no epidemic and no one has died.

According to the current numbers from the CDC, there have been just 159 people in the country to report contracting the measles in 10 states.

As a result of the hysterical coverage, however, a widespread war on those who advocate for informed consent has been waged.

For a few dozens cases of measles, Washington declared a state of emergency and media coverage has been devoted round the clock.

To reiterate, as of February 21, 2019, there were only 159 cases of measles confirmed in the entire country, prompting hysteria. But when 18,000 kids a year go missing, many of them being sold into sex slavery, we hear nothing but crickets from these same people.

It is true that some of these kids will run away, others will escape to get away from abuse, and some will get involved with the wrong crowd and follow along. However, many others are outright stolen or kidnapped and end up being sold on the black market like a commodity.

Equally as disturbing as these children going missing is the fact that no one cares to go looking for them, making them easy prey for human traffickers and predators. In fact, in some states, if one of these children goes missing for over 6 months, they are removed from the system entirely and those responsible for them couldn’t care less.

As Darcy Olsen writes for Arizona Central, “giving up on finding a child after six months is contrary to the very purpose of being a guardian. Closing the books also gives predators a green light: If you can keep a kid hidden for six months, you’re home free. Predators should know that we will never give up on finding these children — ever.”

While the media is incorrectly referring to the measles outbreak as an epidemic, the epidemic of child sex abuse is very real.

The fact is that America has a dark secret that no one wants to admit. Talk of this secret will get you labelled as a conspiracy theorist, fake news; and outlets who report on it will have their organic reach throttled by social media and Google alike.

Despite the overwhelming evidence to the contrary, many in the mainstream media and the government refuse to see this very real epidemic of child sex trafficking in the United States. What’s more, according to the government’s own data, the vast majority of a portion of these trafficked kids are coming from the government system who promises to keep them safe—a horrifying irony indeed. But it appears to be set up this way.

This system is set up to pull children from their families for ridiculous reasons and turn them over to for-profit systems—funded by your tax dollars—that use these children as cash cows and have no incentive to keep them safe.

In 1984, the United States Congress established the National Center for Missing & Exploited Children (NCMEC), and, as part of Missing Children’s Assistance Reauthorization Act of 2013 they receive $40 million to study and track missing and trafficked children in the United States.

In 2017, NCMEC assisted law enforcement with over 27,000 cases of missing children, the majority who were considered endangered runaways.

According to their most recent report complied from FBI data and their own, of the nearly 25,000 runaways reported to NCMEC in 2017, one in seven were likely victims of child sex trafficking. Of those, 88 percent were in the care of social services when they went missing.

Showing the scope of the abuse, in 2017 alone, NCMEC’s CyberTipline, a national mechanism for the public and electronic service providers to report instances of suspected child sexual exploitation, received over 10 million reports. According to NCMEC, most of these tips were related to the following:

Other governmental organizations have corroborated this horrifying trend. In a 2013 FBI 70-city nationwide raid, 60 percent of the victims came from foster care or group homes. In 2014, New York authorities estimated that 85 percent of sex trafficking victims were previously in the child welfare system. In 2012, Connecticut police rescued 88 children from sex trafficking; 86 were from the child welfare system.

Equally as disturbing as the fact that most sex trafficked kids come from within the system is the fact that the FBI discovered in a 2014 nationwide raid that many foster children rescued from sex traffickers, including children as young as 11, were never reported missing by child welfare authorities.

Even high-level government officials have been ensnared in these foster care abuse scandals. As TFTP previously reported, multiple victims came forward and accused Seattle Mayor Ed Murray of sexually abusing them when they were children in Washington’s foster care system.

The records in that case, dating back to 1984, explicitly noted that Ed Murray should “never again be utilized as a certified CSD resource for children.” It also showed that a criminal case was brought against Murray by prosecutors but in spite of the multiple accusations, charges were somehow never filed and his records buried.

As Snopes and the mainstream media in general attempts to smear those who try to call attention to alleged and very real child trafficking, the government’s own data shows how irresponsible this is. While there are certainly some outlandish theories being presented online, the facts are outlandish enough to warrant serious scrutiny. Until this epidemic is taken seriously, the government, the media, and all those who deny it will remain complicit in keeping it going.

As Michael Dolce, who specializes in these horrific child abuse cases, pointed out last year, “we have set up a system to sex traffic American children.” Indeed, and, whether or not it is deliberate, sensationalizing a measles non-crisis is perfect cover to keep that system going.

Matt Agorist is an honorably discharged veteran of the USMC and former intelligence operator directly tasked by the NSA. This prior experience gives him unique insight into the world of government corruption and the American police state. Agorist has been an independent journalist for over a decade and has been featured on mainstream networks around the world. Agorist is also the Editor at Large at the Free Thought Project, where this article first appeared. Follow @MattAgorist on Twitter, Steemit, and now on Minds.

Free ebook How To Survive the Job Automation Apocalypse

Free ebook How To Get Started with Bitcoin: Quick and Easy Beginner’s Guide