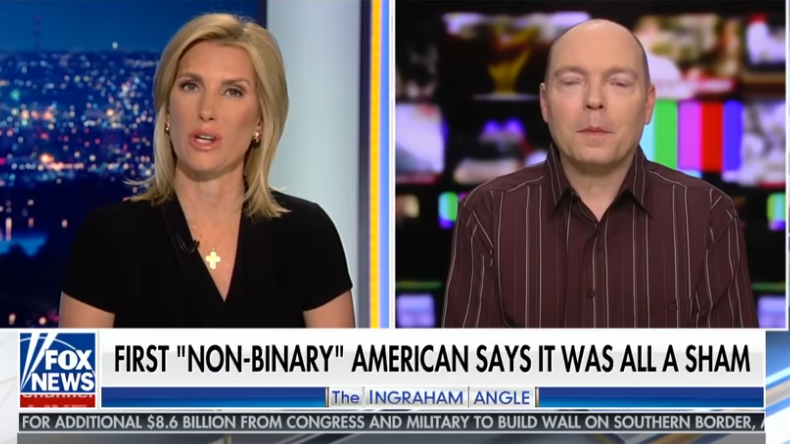 There may be no more polarizing social issue today than the transgender movement. Voices on the left scream that becoming a “man” or a “woman” is a choice, while conservatives insist that you can’t actually change your biological sex.

So who is right? A well-known figure within the LGBT community is speaking out on that issue — but amazingly, he’s siding with conservatives.

Jamie Shupe was born a male but entered the transgender lifestyle around age 50. He underwent hormone replacement therapy during his transition and then became something of a liberal hero when the state of Oregon made a landmark legal decision.

“An Oregon judge has allowed a 52-year-old (Shupe) to change gender identity. Not from male to female, or vice versa. But to a new, third gender,” NPR reported in 2016.

“Jamie Shupe is now legally non-binary — widely believed to be a first for the United States,” that outlet explained.

TRENDING: Republicans in Both Houses Move to Finally Abolish the Time Change

You might think that a trailblazing member of the trans community would be an outspoken advocate for others to follow the same path. But after going through the transition process, Shupe is actually warning people about a “sham.”

“All I needed to do was switch over my hormone operating fuel and get my penis turned into a vagina. Then I’d be the same as any other woman. That’s the fantasy the transgender community sold me,” Shupe wrote in an eye-opening essay published this week for The Daily Signal. “It’s the lie I bought into and believed.”

Shupe, who is an Army veteran and retired mechanic, blasted the medical community for eagerly going along with the demands of those who have convinced themselves that they need life-altering hormones and surgical procedures with almost no questions asked.

“After convincing myself that I was a woman during a severe mental health crisis, I visited a licensed nurse practitioner in early 2013 and asked for a hormone prescription,” he explained.

“Although she’d never met me before, the nurse phoned in a prescription for 2 mg of oral estrogen and 200 mg of Spironolactone that very same day.”

He said that health care professionals should have seen major red flags, including a previous diagnosis of PTSD.

“The nurse practitioner ignored that I have chronic post-traumatic stress disorder, having previously served in the military for almost 18 years. All of my doctors agree on that,” he wrote, also acknowledging being sexually abused as a child.

“Others believe that I have bipolar disorder and possibly borderline personality disorder.

Shupe wrote that a political environment of compliance and fear has influenced doctors and nurses to keep any objections about transgender procedures to themselves.

“I should have been stopped, but out-of-control, transgender activism had made the nurse practitioner too scared to say no,” he scolded.

“Professional stigmatisms against ‘conversion therapy’ had made it impossible for the therapist to question my motives for wanting to change my sex,” Shupe continued.

However, Shupe wrote that he was part of that problem.

“Only one therapist tried to stop me from crawling into this smoking rabbit hole. When she did, I not only fired her, I filed a formal complaint against her,” Shupe wrote. “‘She’s a gatekeeper,’ the trans community said.”

America’s first legal non-binary person went into detail about his celebrity status as a result of the Oregon legal decision, with whirlwind media attention and countless left-leaning groups fawning over him. But as many others have found out, support from the left can dry up overnight if someone dares to hold the “wrong” opinions.

“It wasn’t until I came out against the sterilization and mutilation of gender-confused children and transgender military service members in 2017 that LGBT organizations stopped helping me,” Shupe wrote. “Most of the media retreated with them. Overnight, I went from being a liberal media darling to a conservative pariah.”

Now, the transgender pioneer is trying to put that time behind him and is working to face the realities of his underlying problems — along with the bizarre politics surrounding the controversial issue.

“The truth is that my sex change to nonbinary was a medical and scientific fraud,” he admitted. “All of my sexual confusion was in my head. I should have been treated. Instead, at every step, doctors, judges, and advocacy groups indulged my fiction.”

He’s slowly rebuilding his life while speaking out to counsel others against making the same mistakes.

“In January 2019, unable to advance the fraud for another single day, I reclaimed my male birth sex. The weight of the lie on my conscience was heavier than the value of the fame I’d gained from participating in this elaborate swindle,” he said.

“I’m one of the lucky ones. Despite participating in medical transgenderism for six years, my body is still intact. Most people who desist from transgender identities after gender changes can’t say the same,” Shupe warned.

The left likes to paint anybody who speaks out against transgenderism as hateful bigots, but that is far from the truth — and Shupe, of all people, should know.

“Two fake gender identities couldn’t hide the truth of my biological reality. There is no third gender or third sex. Like me, intersex people are either male or female,” he wrote. “Their condition is the result of a disorder of sexual development, and they need help and compassion.”

Instead of either scorning or enabling people who are suffering from mental illness, the best approach may be to offer them hope and help while refusing to pretend that body-altering transgender medical procedures are anything but disastrous.

Telling the truth is important, even when it goes against the grain. Jamie Shupe has found a positive path by being honest about his situation, and it’s time for America as a whole to do the same.