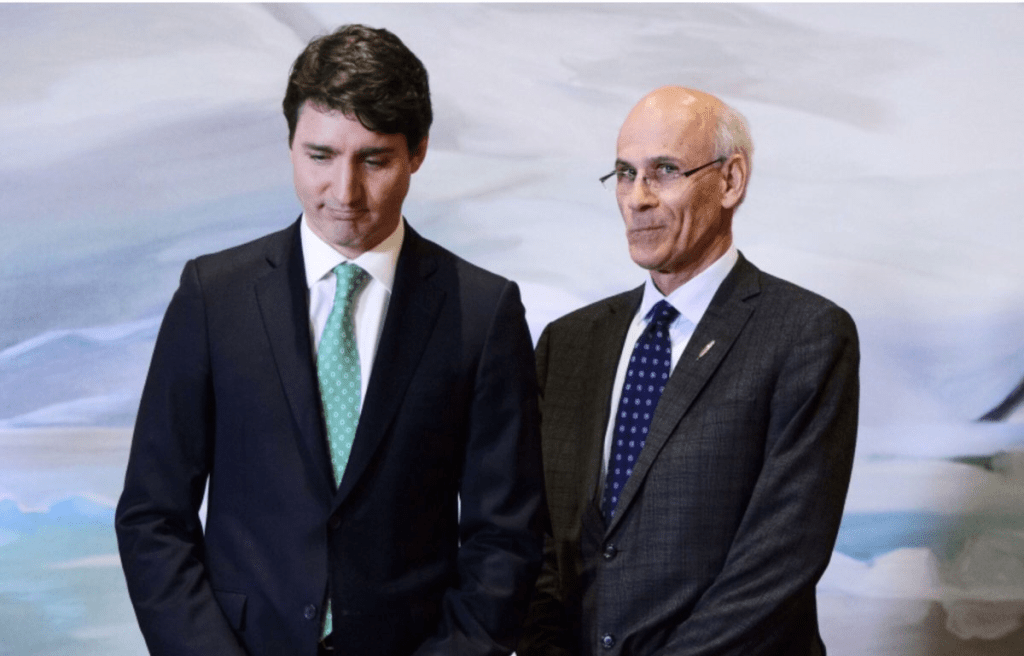 When the Canadian government entered into an agreement with BlackRock in 2017, what occurred was an amalgamation with the Canada Infrastructure Bank (CIB). In doing so, Canada became a subsidiary of the world construction cartel. Key players in SNC Lavalin, the newly minted CIB, the Privy Council are developers of the social economy, a complex scheme to fleece Canada. They are operating above the law since that is exactly where these systems were created.

The CIB funding is going to support infrastructure overseas, to support the Construction Cartel. This is a funding resource for SNC because they have been defunded by the World Bank. The CIB is wealth transfer diverting Canadian tax dollars, and even more disastrous our pension funds, to third world countries to build their infrastructure, create jobs and stimulate their economy. Let’s have a look at the current CIB board members. We will see how they overlap through government, business and foundations.

Bruno Guilmette served as interim Chief Investment Officer of Canada Infrastructure Bank, where he established the organization’s initial investment policies and processes (1). Previously he served on the Executive Committee and Board of the Global Infrastructure Investor Association (GIIA). The GIIA plans and delivers a program of global advocacy and stakeholder engagement that promotes global private investment in infrastructure(2)(3). Rapid income growth across developing countries as well as rapid urbanization is driving enormous demand for infrastructure investment vital to their country’s future economic growth but many of these emerging economies are stuck on the same question: how to pay for it?

Government budgets are being strained by public debt, but according to most estimates there is more than $1 trillion in private sector capital available from millions of individual citizens in the form of pension funds (4). Institutional investors and banks assets could also “partially support infrastructure projects”, with 87% of these funds originating from advanced economies (2). As is described in this article written by the GIIA, Canada’s Infrastructure Bank is setting up the guidelines for the procurement of money for these global infrastructure programs: (4)

“Two countries that are succeeding in unlocking this dry powder (pension funds) are Australia and Canada. They have invested in a specialist central resource (Infrastructure Bank) to gather and share best practices for procuring bodies, thereby building a capability to identify the pipeline of infrastructure requirements and the tool kit of financial models to procure them.”

Therefore, Trudeau’s Infrastructure Bank, promoted by the Liberals as a tool for developing infrastructure projects within Canada was an out-right lie to Canadians. Infrastructure development, jobs and the economic growth that comes with it was never intended to service the needs of Canadians but rather to benefit Global Construction companies and citizens of third world economies! Companies such as SNC-Lavalin were the only ones awarded contracts; half of these contracts were funding for work outside Canada (5).

“And it’s true that SNC-Lavalin’s largest shareholder is the Quebec public-service pension fund, whose pet project is a light-rail network, whose main construction contractor is SNC-Lavalin. And it’s true that the head of the pension fund pushed hard for the federal government to set up an Infrastructure Bank whose only investment to date… was in the light-rail network promoted by the pension fund that is SNC’s biggest investor and which, in turn, is the rail project’s biggest contractor.”

Bruno Guilmette also has other ties to SNC-Lavalin and they include:

Billions of dollars of Canadian taxpayer money is being poured into SNC-Lavalin with much of that cash going overseas (5). The World Bank has listed SNC-Lavalin as an ineligible firm to receive funding due to allegations of fraud and corruption (5). This being the case, was the Infrastructure Bank set up to fund the corrupt construction cartels? If SNC is convicted, the federal government is still on the hook to pay out the contracts’ worth to SNC’s shareholders. That will not only damage the Canadian economy, the Canadian taxpayer will also be responsible for the losses. A bigger question is, how much of the $35 billion of the $186 billion in contracts already pledged has SNC have been signed with the Infrastructure Bank? And if convicted, how much money are we going to be shelling out to SNC?

Blackrock, a US-based asset management company overseeing 5.1 Trillion in investments (17), reported on February 8, 2018 that it was raising $10 Billion in private equity funds and that it would seek a private commitment from sovereign wealth funds (e.g. pension funds) and other institutional investors to set up a fund called “BlackRock Alternative Investments” (18)(19). Heading up this project would be Andre Bourbonnais who was Senior Managing Director of the CPP Investment Board and Global Head of Investment Partnerships (2010-2015), and before that worked for Caisse de Depot et Placement du Quebec (2004-2010)(20). The current President of Canada Infrastructure Bank, Pierre Lavallee worked for Andre Bourbonais in 2012 at CPP Investment Board as VP for Investment Partnerships (12).

What exactly is the “BlackRock Alternative Investments” fund?The “social economy” is often referred to as the “alternative economy”; a global movement powered by corporations and their foundations that promotes communism (21). This raises several questions: Is Canada’s Infrastructure Bank managed by BlackRock? Does BlackRock have controlling interest in this bank? And will this bank be used to fund the social economy? (17) The connections between these pension boards, corporations and the president and directors of the Canada Infrastructure Bank warrant public scrutiny.

New evidence reveals that BlackRock’s role in the Canada Infrastructure Bank may have also included advising on key personnel including Pierre Lavallee, the current president of Canada Infrastructure Bank (22). Trudeau consulted BlackRock extensively for the $35 billion investment in the new bank which critics say will put the interests of investors ahead of Canadian Taxpayers (23). After all, BlackRock’s fiduciary responsibility is to its clients and not Canadian taxpayers, pension investors or consumers. Moreover, the Paradise Papers include 9 companies connected to the BlackRock Group; these are tax havens that contribute to income inequality, with those benefiting from tax havens being wealthy corporations at the expense of taxpayers (17).

This year’s election should definitely not focus on the Dairy Cartel and supply management, for that is but a smoke screen when compared to the billions of dollars at stake in the hands of the Construction Cartel and it’s influence on Canada Infrastructure Bank. It is a cartel which includes not only SNC-Lavalin, but many other corporations operating in Quebec, including those supporting members of the People’s Party of Canada. Out of 34 corporations that donated to Maxime Bernier, 21 were related to the construction industry. After all, the Beauce is a lot more than just dairy! One thing is certain, Canada is no longer a sovereign state but rather being run like a corporation whereby the rights of citizens are being left at the wayside in favour of the globalist agenda. Canadians were never informed, never consulted, nor did we vote for this. We are indeed living under Canada Inc. (24).

Continue reading “The Criminal Cartel of the Canada Infrastructure Bank Board“.