Australian rugby star Israel Folau is facing the prospect of losing his professional contract after he made a call on social media for “sinners” to “repent.”

On Wednesday, the devout Christian posted on Instagram that “drunks, homosexuals, adulterers, liars, fornicators, thieves, atheists and idolaters” should “repent” because “only Jesus saves”, and made similar remarks on Twitter. 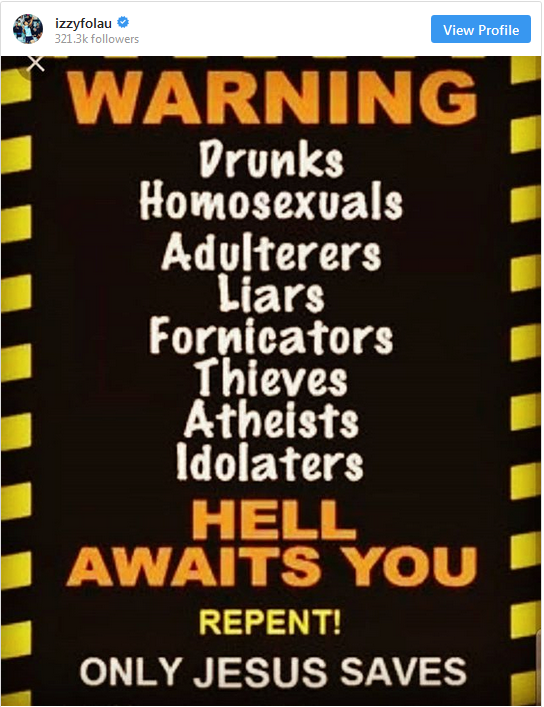 “He does not speak for the game with his recent social media posts,” the governing bodies said. “In the absence of compelling mitigating factors, it is our intention to terminate his contract.”

Rugby Australia and the NSW Rugby Union, which is responsible for Super Rugby side NSW Waratahs, said they have made “repeated attempts” to contact Folau and he has failed to get in touch with either organisation.

“Israel has failed to understand that the expectation of him as a Rugby Australia and NSW Waratahs employee is that he cannot share material on social media that condemns, vilifies or discriminates against people on the basis of their sexuality,” the governing bodies said in a statement.

“As a code we have made it clear to Israel formally and repeatedly that any social media posts or commentary that is in any way disrespectful to people because of their sexuality will result in disciplinary action.”

Folau sparked a fierce backlash in 2017 after he entered the Australia’s’s debate on same-sex marriage and said he would not support a proposal to make it legal.