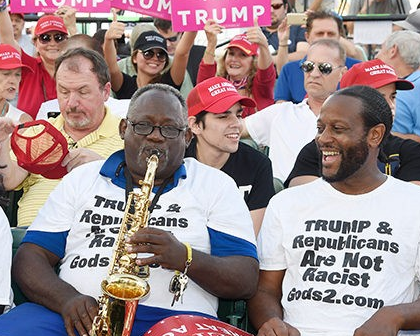 “I believe that Trump’s team, if not him, understands the fissures in this immigration debate and is using them,” Blow wrote April 10.  He continued:

As Trump said in January in an Oval Office address after shutting the government down because Congress wouldn’t fund the construction of his wall: “All Americans are hurt by uncontrolled illegal migration. It strains public resources and drives down jobs and wages. Among those hardest hit are African-Americans and Hispanic Americans.”

That is a pitch to both blacks and Hispanics already in this country. There is a real cleavage between second-, third- and fourth-generation Hispanics and new arrivals.

In 2016, Trump won the votes of roughly one-in-eight black men and one-in-three Hispanic men, while getting lower support from black and Hispanic women. Some of this sexual disparity exists because of Trump’s “Hire American” economic and immigration policy, which appeals mostly to male voters because it pressures companies to hire Americans at decent wages.

That small level of black electoral support allowed Trump to win the 2016 election — but it may rise before the 2020 election despite Democrats’ loud charges of racism.

In 2018, wages for blue-collar Americans jumped by 4 percent partly because of Trump’s “Hire American” policy.

Studies show that Trump’s green-colored pocketbook politics can be more important for blue-collar blacks than the Democrats’ race and resentment policies, which appeal more to white-collar blacks, such as Blow. In 2006, author Tatishe Nteta wrote in American Political Research journal: