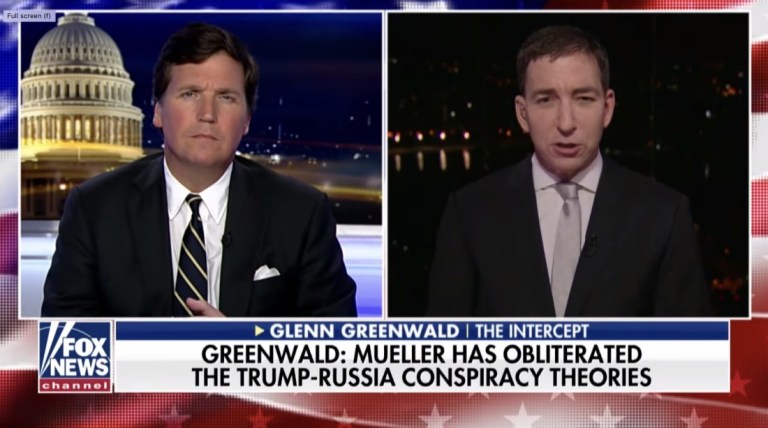 One of the reasons why tens of millions of Americans put Donald Trump in the White House was because he wasn’t born and bred of the Washington political establishment.

The primary reason why the Washington political establishment wants him out of the White House is precisely that he isn’t one of them.

But try as they have, the D.C. Swamp — consisting of politicized factions within the Justice Department and intelligence community, working hand-in-hand with a corrupt elitist media — has been unable to depose POTUS Trump.

Beyond that, they haven’t been able to shame Trump out of office, silence him, or force him off his campaign pledges and policy priorities, all of which has further frustrated and infuriated them.

Pulitzer Prize-winning journalist Glenn Greenwald, the founder of The Intercept, joined Fox News‘ Tucker Carlson Friday to discuss special counsel Robert Mueller’s findings of ‘no collusion’ and ‘no obstruction of justice,’ which has thrown Democrats and their media allies into yet another meltdown.

Greenwald observed that POTUS Trump has managed to do what no other president in the modern era has been able to do to their political opponents: He has “broke the brains” of a “lot” of people.

“If you listen to the media discourse, outside of a few circles, they’ve just put collusion and conspiracy and all of those conspiracy theories they’ve spent the last three years endorsing––flushed it down the toilet like they don’t exist and just seamlessly shifted to obstruction. And then they’re conflating them to claim that they were right all along,” Greenwald said of Democrats and their media allies, all of who screamed “Collusion! Collusion!” for the better part of two years but have now switched to accusing the president of ‘obstructing justice,’ which is absurd.

“And that is really the alarming thing,” Greenwald continued.

“I think that in a lot of ways Donald Trump broke the brains of a lot of people, particularly people in the media who believe that telling lies, inventing conspiracy theories, being journalistically reckless, it’s all justified to stop this unparalleled menace. And that’s a good thing for an activist to think and a really bad thing for a journalist to think,” he added.

Mind you, the ‘seamless shift’ from collusion to obstruction is just part of the ongoing coup attempt.

There never was going to be a ‘finding of collusion’ because Obama’s Deep State made it up; it was always a fabrication. The past 18 months’ worth of ‘investigation’ on Mueller’s part wasn’t an investigation in the normal sense of the word, it literally was what the president described it as — a “witch hunt” probe looking something, anything, he could be charged with.

The “obstruction” garbage stems from the claim that since he fired that worthless hack James Comey as FBI director, that amounted to an effort to ‘hide’ the ‘collusion’ — which is a phony allegation, to begin with. Besides, Trump never fired Mueller, never fired any of his staffers, and allowed the probe to continue to its conclusion. How, again, is that “obstruction?”

As former South Carolina GOP congressman Trey Gowdy said Friday, that fact that Mueller’s probe is over won’t stop angry ‘broke brain’ Democrats from continuing to pretend like POTUS has done something wrong. The shenanigans will continue.