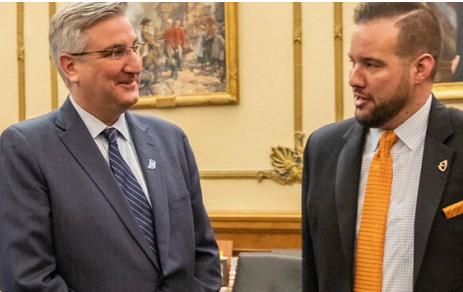 Indiana has strengthened its Stand Your Ground Laws.

Eagle Country reports that House Enrolled Act 1284, colloquially known as “Kystie’s Law”, was signed into law on April 26, 2019 at the NRA national convention.

This bill was authored by State Representative Jim Lucas and was named in honor of Kystie Phillips, an Ohio County resident who fatally shot a man who was attacking an Indiana Conservation Officer.

Phillips faced a wrongful death lawsuit from the assailant’s family.The family suing Phillips eventually dropped the lawsuit this past January.

Phillips testified before House and Senate committees about her riveting experience and her support for this law. HEA 1284 made it out of the House on a 64-17 vote and was then passed in the Senate on a 37-7 vote.

Holcomb said, “If you’ll permit me to brag a little bit about our state, I’ll tell you that there’s simply no place more friendly and more supportive of the Second Amendment than right here on Hoosier soil.”

This law requires judges to award defendants attorney’s fees if they determine that a lawsuit was unjustly filed against a defendant. This is designed to keep defendants who used a firearm in self-defense from being put in financial ruin.