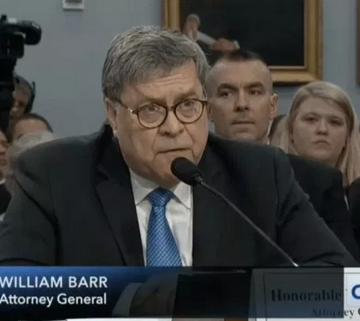 For more than two years, leaks of highly sensitive, often classified information to a few ‘privileged’ media outlets by members of the deep state occurred on a regular basis as the coup attempt against POTUS Donald Trump slowly unfolded.

And for just as long, supporters of the president pleaded with members of Congress and the Jeff Sessions-run Justice Department to take action against those conspirators.

Sessions, who had foolishly recused himself from ‘all things Russia,’ refused to act, frustrating tens of millions of Americans who saw the president battered daily by skewed reporting based on contextual leaks aimed at creating the narrative that POTUS was a Putin stooge at worst and a criminal at best.

But as the saying goes, there’s a new sheriff in town — Attorney General William Barr — and he’s preparing to get to the bottom of this coup attempt and, we believe, hold those who helped craft and execute it responsible.

At least, that’s what he said under oath on Wednesday during his appearance before the Senate Judiciary Committee.

In particular, the committee’s former chairman, Sen. Chuck Grassley (R-Iowa), asked Barr about the leaks and what he was doing about them.

“The Inspector General found that during the department’s investigation of Hillary Clinton for mishandling classified information, there was a culture of unauthorized media contacts. During the Russian investigation, the leaks continued. Leaks undermine the ability of investigators to investigate,” Grassley argued. “Further leaks to the papers while Congress’s questions to the department go unanswered is unacceptable.

“What are you doing to investigate unauthorized media contacts by the department and FBI officials during the Russian investigation?” Grassley asked.

.@ChuckGrassley asks Bill Barr: “What are you doing to investigate unauthorized media contacts by the department and FBI officials during the Russian investigation?”

“When you’re investigating leaks at the Department of Justice and the FBI, I hope you will include the Mueller team as well,” Kennedy said, concluding his remarks.

Last month, House Intelligence Committee Ranking Member Devin Nunes (R-Calif.) sent at least five criminal referrals to AG Barr regarding spying on the Trump campaign that he says actually began in 2015, shortly after the president declared his intention to seek the GOP nomination.