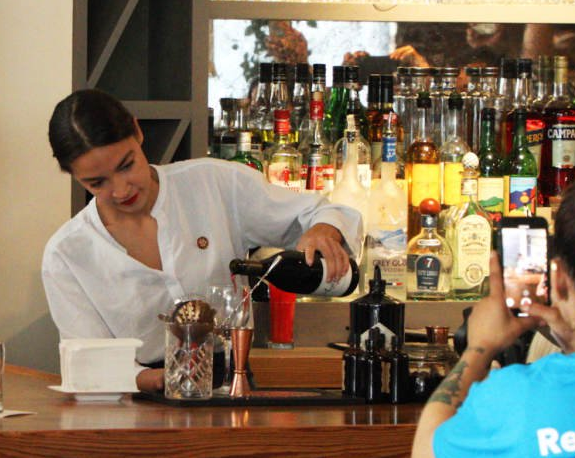 After Five Months In Congress, Ocasio-Cortez Wants A Raise!

A representative in the House makes $174,000 a year. That’s not exactly a “1 percenter” salary, but nearly quadruple current median annual income in America. Not to mention the fact that they all have access to the best — and least expensive — health care in the country … for life.

That wasn’t enough for some members of the House. The Democratic-controlled chamber proffered a new salary of $178,500, a $4,500 raise. But even some Democrats balked at the raise, and the whole effort was scrubbed on Monday.

Enter New York Rep. Alexandria Ocasio-Cortez, a Democratic socialist and former bartender who has been in the House since January. She said the money was, like, no big deal.

“It’s not even like a raise, it’s like a cost-of-living adjustment,” Ocasio-Cortez said. She said efforts to oppose the raise were “superficial. … This is why there’s so much pressure to turn to lobbying firms and to cash in on member service after people leave, because precisely of this issue.”

@AOC defends a $4,500 pay raise for herself: “It’s not even like a raise.” pic.twitter.com/ugFaZuSm7c

She said all people deserve to make more money — especially her.

“It may be politically convenient, and it may make you look good in the short term for saying, ‘Oh we’re not voting for pay increases,’ but we should be fighting for pay increases for every American worker,” she said. “We should be fighting for a $15 minimum wage pegged to inflation so that everybody in the United States with a salary with a wage gets a cost of living increase. Members of Congress, retail workers, everybody should get cost of living increases to accommodate for the changes in our economy.

“And then when we don’t do that, it only increases the pressure on members to exploit loopholes like insider-trading loopholes, to make it on the back end,” she said.

AOC is decidedly generous with money — at least other people’s money. When she took office, she declared that no staffer in her office would make less than $52,000 a year.

Leadership starts with our choices.

That’s why I decided that no one on my staff will make less than $52k/year.

It’s likely one of the highest entry-level salaries on the Hill. We pinch pennies elsewhere, but it’s worth every dime to pay a living wage.https://t.co/IxfNH4632h

That’s a good bit more than some staffers in the White House make, but hey, AOC gets $1 million from the taxpayers to dole out to her staff, so no biggie.

On Tuesday, AOC again defended her support for the now-dead raise.