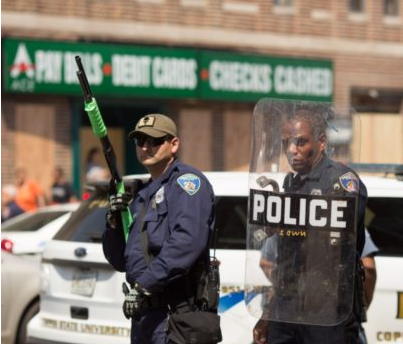 Shootings are surging in Baltimore despite the presence of bans on “assault weapons” and “high capacity” magazines, two of the Democrats’ go-to gun controls.

Maryland banned “high capacity” magazines and a variety of “assault weapons” via the Firearm Safety Act of 2013. That Act also required would-be handgun buyers to submit fingerprints to the state police as a part of the registration scenario.

On March 27, 2017, Breitbart News reported the criminal use of “high capacity” magazines was at a seven-year high. In other words, the ban had only impacted law-abiding citizens. Criminals still had – and still used – the prohibited magazines.

Now the Baltimore Sun’s Justin Fenton reports the shootings in Baltimore are on track to surpass the numbers seen last year, and those  were up nearly 80 percent over figures from 2014.

Fenton noted, “In 2018 total non-fatal and fatal shootings in Baltimore were up 79 percent from 2014. And this year is ahead of last year’s pace. Unbelievable.”

Similar results have arisen in other places where gun control upon gun control has been instituted. For example, California has some of the most stringent gun controls in the U.S. Those controls include an “assault weapons” ban, a 10-day waiting period on gun purchases, gun registration requirements, a requirement that would-be gun buyers get a safety certificate from the state, a ban on campus carry, a “good cause” requirement for concealed carry issuance, and much, much, more.

Yet the state witnessed an 18 percent rise in firearm homicides between 2014 and 2016.

The city of Chicago banned handgun ownership in 1982, and that ban was in place till 2010. Homicide numbers while the ban was in place were even higher than the homicides numbers Chicago has infamously racked up during recent years.

All the homicides from the 1990s occurred while Chicago’s handgun ban was in place.

Criminals held on to their guns, regardless of the gun laws.

AWR Hawkins is an award-winning Second Amendment columnist for Breitbart News, the host of the Breitbart podcast Bullets with AWR Hawkins, and the writer/curator of Down Range with AWR Hawkins, a weekly newsletter focused on all things Second Amendment, also for Breitbart News. He is the political analyst for Armed American Radio. Follow him on Twitter: @AWRHawkins. Reach him directly at [email protected]. Sign up to get Down Range at breitbart.com/downrange.