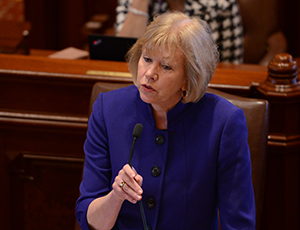 Illinois State Sen. Julie Morrison (D) taunted a concerned gun owner during a town hall by telling him she might forgo fining him and simply confiscate his firearms.

The exchange was caught on video by the Illinois State Rifle Association and was tied to proposed fines for keeping commonly owned semiautomatic firearms in one’s home.

The concerned gun owner pointed to SB107 and said the purpose of it was “to take away [his] semiautomatic firearms.”

Morrison then interjected that the purpose was not to take them, but to prevent any future sales.

The gun owner responded by pointing out that the ban on future sales included a fine for current owners who did not hand their guns over. He said, “You want me to turn them over to the state police unless I pay a fine for each firearm and register them, then I get to keep them.”

The gun owner then asked, “If I get to keep it–if I pay a fine and register it–then, how dangerous is it in the first place and why do you need to ban it all?”

People in attendance applauded the gun owner’s point and once applause died Morrison said, “Well, you just maybe changed my mind. Maybe we won’t have a fine at all, maybe it’ll just be a confiscation and we won’t have to worry about paying the fine.”

NRATV’s Cam Edwards commented on the exchange that drew Sen. Morrison into the light, where she openly talked confiscation. He described it as part of a larger “push-back” characterized by Second Amendment Sanctuary declarations in southern counties in Illinois.

Edwards said, “It’s been interesting to see this push-back in Illinois. Obviously, over the last few years we’ve seen a lot of counties outside of the Chicago-land area have been very vocal in pushing back. But I’ve got to tell you, I’ve been really impressed by the number of gun owners in northern Illinois…who have been speaking out.”