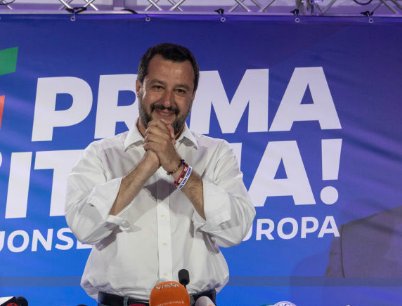 Italy and USA ‘Never Been Closer’

Italian interior minister Matteo Salvini gushed Sunday over his recent visit to the United States, declaring he found “total harmony” between the current political course of the two nations.

In my trip to Washington last week, “I found total harmony on international security and politics but also on the economy and tax revolution,” Mr. Salvini stated on Twitter.

“Proud to see how much Italy is appreciated in the world,” he said. “Italy and America have never been closer!”

Mr. Salvini’s evaluation of the meeting with U.S. leaders was mirrored in Vice President Mike Pence’s statements on the visit, declaring that the two countries enjoy “shared priorities” and tweeting: “The transatlantic alliance is stronger than ever!”

Great meeting with Deputy Prime Minister @matteosalvinimi of Italy today to discuss the U.S. – Italy relationship and our shared priorities. The transatlantic alliance is stronger than ever! pic.twitter.com/zYCmI18hIw

Mr. Salvini traveled to the U.S. with the express purpose of cementing his country’s partnership with the Trump administration, meeting with several top U.S. officials, including Vice President Mike Pence and Secretary of State Mike Pompeo.

“At a time when European Union institutions are fragile and changing significantly, Italy wants to be the first, most solid, valid, credible and coherent partner for the United States,” Salvini wrote on his Facebook page.

The interior minister and leader of the Lega party also stressed his shared vision with the Trump administration on “Iran, Venezuela, Libya, the situation in the Middle East, Israel’s right to exist,” and “concerns about Chinese arrogance towards Europe and the African continent.”