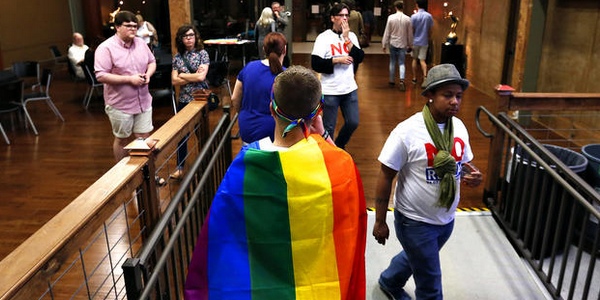 A survey produced by the Harris Poll in partnership with Gay & Lesbian Alliance Against Defamation (GLAAD) finds young Americans’ comfort with LGBTQ individuals has plunged from 63 percent in 2016 to 45 percent in 2018.

According to the Accelerating Acceptance report, Americans aged 18-34 who say they are comfortable interacting with LGBTQ people dropped from 63 percent in 2016 to 53 percent in 2017, and then to 45 percent in 2018.

“At the same time, the Trump administration continues to attack the LGBTQ community through discriminatory policies and targeted rhetoric, and LGBTQ Americans are becoming more vulnerable to hate crimes and violence,” GLAAD said in response to the survey outcome.

“Putting LGBTQ-specific issues front and center stands in stark contrast to the rhetoric and record of the Trump administration, which has put a target on the backs of LGBTQ people and other marginalized communities since the day he took office.” #DemDebate @sarahkateellis

President Donald Trump tweeted his support of the LGBT community by condemning “dozens of countries worldwide that punish, imprison, or even execute individuals on the basis of their sexual orientation.”

“My Administration has launched a global campaign to decriminalize homosexuality and invite all nations to join us in this effort!” the president said.

As we celebrate LGBT Pride Month and recognize the outstanding contributions LGBT people have made to our great Nation, let us also stand in solidarity with the many LGBT people who live in dozens of countries worldwide that punish, imprison, or even execute individuals….

Additionally, the discomfort of young Americans has increased with the thought of their child’s placement with an LGBTQ teacher, from 25 percent in 2016 to 29 percent in 2017, and then to 33 percent in 2018.

Also, 39 percent of younger Americans said they were uncomfortable discovering their child experienced an LGBTQ school lesson, compared with 30 percent in 2017 and 27 percent in 2016.

In contrast, the survey showed that American adults aged 72 and older have decreased in their discomfort with LGBTQ lessons in schools, 47 percent to 37 percent.

“We count on the narrative that young people are more progressive and tolerant,” he said. “These numbers are very alarming and signal a looming social crisis in discrimination.”

Gerzema suggested the cause of the drop in LGBTQ acceptance is due to young people on social media who are exposed to “mean tweets.”

“Our toxic culture is enveloping young people,” he said.

Sarah Kate Ellis, GLAAD president, said the decline in young Americans’ acceptance of LGBTQ is surprising, given their contact with more people who identify as such, noted the news report.

In the report, GLAAD notes that “young people are identifying as LGBTQ in higher rates than ever before.”

“This newness they are experiencing could be leading to this erosion,” Ellis said. “It’s a newness that takes time for people to understand. Our job is to educate about non-conformity.”

The LGBTQ activists explain that, when a decline in acceptance of this population was observed among younger males, “GLAAD launched a program dedicated to working with the video game industry on LGBTQ inclusion, to bring LGBTQ characters and stories to a world where male audiences were consuming content.”

According to USA Today, Ellis and Gerzema attribute the drop in LGBTQ acceptance to political rhetoric and policy changes, “such as a ban on transgender people in the military and religious exemption laws that can lead to discrimination, Ellis and Gerzema said. Both are a likely force behind the young’s pushback on tolerance, they said.”

“We are seeing a stark increase in violence in the community,” Ellis added.

“In this toxic age, tolerance –even among youths – now seems to be parsed out,” said Gerzema. “Nothing today should be taken for granted.”