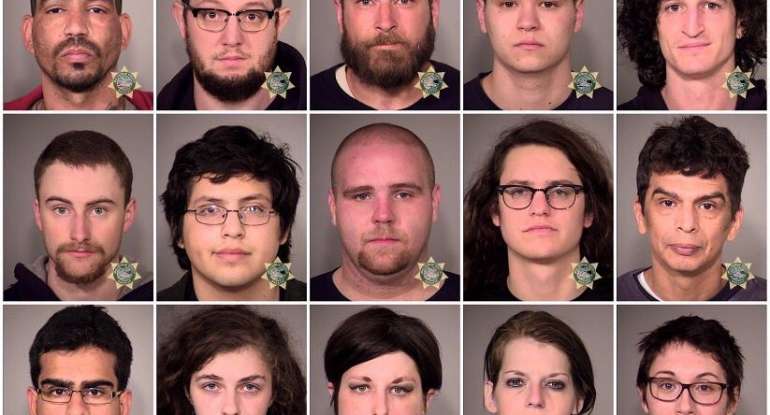 Babylon Bee and Christian Daily Reporter founder Adam Ford tweeted, “Portland Antifa mugshots have been released and I’m sure you’ll agree that the lack of diversity is extremely problematic.”

So problematic. TMZ has more diversity in their collection of mugshots from New Hampshire’s North Country. You’ll find a better cross-section of intersectionality on Martha Stewart’s mailing list. Or maybe these are just everyone’s headshots from a recent casting call for a reboot of “Fargo.”

After sending journalist Andy Ngo to an overnight hospital stay for a brain-bleed last week for the crime of reporting while Asian (or was his crime being gay?), Antifa thugs took their audacity to new lows over the weekend. In more Portland street violence last week, the Rose City Antifa account blamed John Blum for getting in the way of their fists and clubs.

“Oregon III% member John Blum rushed into a crowd of anti-fascist protesters swinging a metal baton at them … the protesters defended themselves,” tweeted Always Antifascist, the Rose City Antifa account.

Mr. Blum insisted that’s not the way it happened. He said he was trying to help a friend who was under siege as well as protect himself after being sprayed by mace. He suffered bruises, a cut over his eye and a gash to his head that required four staples at the emergency room, while his attackers appeared to escape unscathed.

Or as Blum put it in an interview, “The whole reason we do this is because in my opinion, they’re trying to stop us from doing this. Why do they have a right to stop people from doing what they feel is right? To be able to express themselves?

Antifa may take over the streets, intimidate people, and beat them if they aren’t sufficiently intimidated. And people like Blum had best keep their mouths shut about it, because Antifa is fighting fascism when they send old people and gay Asian-Americans to the hospital.

Robby Soave wrote for Quillette last week that Antifa is “in love with street violence.” He describes the recent scene in Portland: