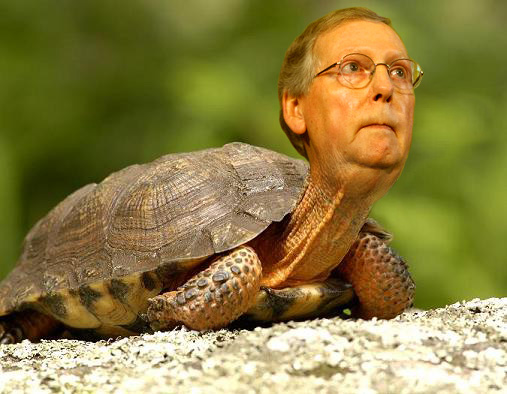 They do not want strong conservatives in Washington D.C. to help Trump fight for his agenda.

Organs of the Republican Party establishment, particularly the National Republican Senatorial Committee (NRSC) and the Senate Leadership Fund (SLF), are growing increasingly concerned that the Trump wave in 2020 could usher ‘America First’ candidates into the Senate.

They intend to put considerable resources toward stopping the upstart Senate campaigns of Kris Kobach in Kansas and Judge Roy Moore in Alabama. Kobach has been shut out of the Trump administration after losing a bid for Kansas governor last year, and Moore’s U.S. Senate chances were torpedoed in 2017 after being accused without evidence of sexual improprieties with minors.

“We don’t need to be having any problems, it’s not a state we can stumble in. The map for the majority is OK, but if you have to start diverting resources to Kansas it complicates things,” a GOP establishment operative told The Hill.

Senate Majority Leader Mitch McConnell (R-KY) is attempting to recruit Secretary of State Mike Pompeo, who has given many ‘Never Trumpers’ prominent roles in the State Department, to run for U.S. Senate in Kansas to stop Kobach.

“I’m not sure the president agrees with this, that I’d love to see the secretary of State run for the Senate in Kansas. But the filing deadline is not until next June,” McConnell said.

Retiring Sen. Pat Roberts (R-KA), who Kobach is attempting to replace, is also casting doubt on his efforts.