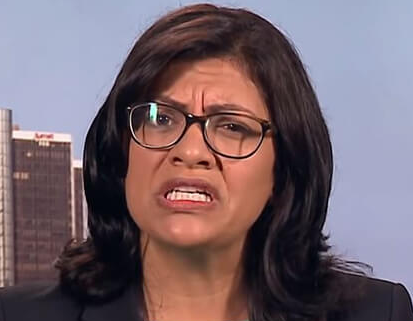 President Trump was right to isolate and target the radical America-hating lunatics and Socialist “squad” leaders in Congress.
Squad member Rashida Tlaib appears to have severe anger issues and a dangerous impulse control disorder.
Here are three videos that prove that Tlaib is not your average angry liberal and should be ordered to seek professional help.

Rashida screaming after her swearing into office:
“Impeach the motherf*cker!”

Unhinged Rashida removed from a Trump rally and hurling insults at Trump supporters.
At a Detroit rally during the 2016 election:

And finally this frightening video of Rashida Tlaib in July in Texas.
This woman needs help.

This Unhinged Nutcase is a freshman Democrat serving in the US Congress. Let that sink in! ⁦@RashidaTlaib⁩ pic.twitter.com/mMM6dc4ijK