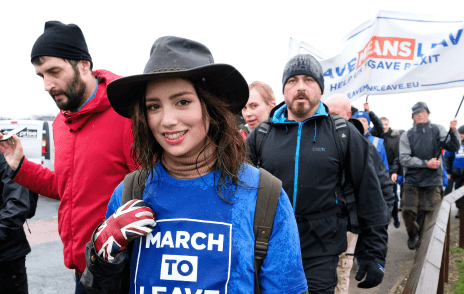 Poll: 54 Per Cent of Brits Want Brexit ‘By Any Means’, Including Suspending Parliament

54 per cent of Britons want the Prime Minister to deliver Brexit “by any means” necessary, even if he has to temporarily suspend Parliament to stop MPs from cancelling or delaying its October 31st deadline.

Presnted with the statement “The Prime Minister needs to deliver Brexit by any means, including suspending Parliament if necessary, to prevent MPs from stopping it” by polling firm ComRes, 54 per cent of the public signalled their agreement, The Telegraph reports.

By party, respondents who identified as Conservative Party voters backed the statement by an even more decisive 76 per cent, as did a significant 32 per cent minority of Labour voters, and even 25 per cent of voters who back the slavishly europhile Liberal Democrats.

“I would hope that the EU now fully understands the UK’s determination to leave the EU on Oct 31st, no ifs or buts,” commented a spokesman for Boris Johnson.

“We stand ready to negotiate [a new withdrawal agreement],” he added.

‘The Prime Minister needs to deliver Brexit by any means, including suspending Parliament if necessary, to prevent MPs from stopping it’

Commentators with an incomplete understanding of the British constitution have previously complained that a prime minister causing anti-Brexit legislative action to fail by advising the Queen to prorogue the parliamentary session would violate the principles of parliamentary sovereignty.

However, institutional writers such as A. V. Dicey, atuthor of the seminal Introduction to the Study of the Law of the Constitution, have been clear that parliamentarians “can in accordance with the constitution be deprived of power [when] there is fair reason to suppose that the opinion of the House is not the opinion of the electors.”

Edmund Burke, considered the founding father of British conservative thought and often invoked by EU loyalists suggesting that MPs revoking Brexit would be in line with “Burkean representative democracy”, was similarly clear that “The virtue, spirit, and essence of a House of Commons consists in its being the express image of the feelings of the nation”, and that “It was not instituted to be a control upon the people, as of late it has been taught… It was designed as a control for the people.”

It should be noted that proroguing the parliamentary session would merely stop MPs from preventing the October 31st Brexit already provided for by parliamentary legislation — the European Union (Withdrawal) Act — and would not involve a despotic seizure of power in which Government would be able to rule by decree.