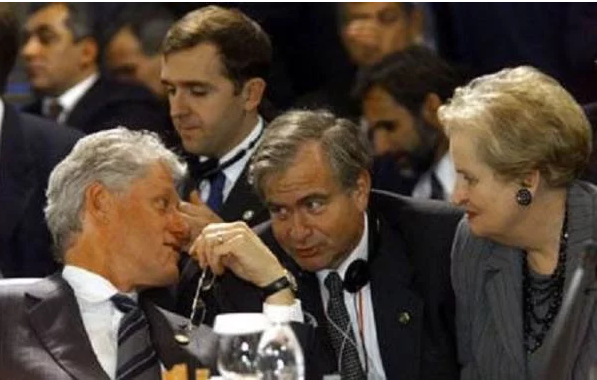 Berger was also famous for being charged with stealing documents from the National Archives but stuffing them in his clothes to protect President Clinton and himself from actions related to Osama Bin Ladin. US News reported about Berger –

It’s been almost eight years since Clinton-era national security adviser Sandy Berger smuggled classified documents out of the National Archives that detailed his boss’s efforts to thwart terrorist threats to the millennium celebrations. The crime cost Berger $50,000, 100 hours of community service, his security clearance, and his law license. But the agents who went after him haven’t forgotten. “It weighs on you,” says Archives Inspector General Paul Brachfeld.

And now they’ve made Berger the poster boy for a new anti-theft initiative. The outreach to archivists includes a slide show that pictures Berger and three other smugglers under the headline: “To Catch a Thief.” What’s more, Brachfeld now has an archival recovery team assigned to work theft cases. “Those acts I don’t think can be re-created today,” he tells our Caitlin Huey-Burns.

Still, the Berger episode gnaws at Brachfeld because the former top official abused his privileges and because Berger’s actions might have robbed the 9/11 Commission of key details related to its probe of the terror plot. Brachfeld says Berger was given “unique privileges” just “because he was Sandy Berger.” But, he adds, that kind of special treatment will never again be provided. “Those unique privileges were rescinded, in terms of it wasn’t going to happen again,” says Brachfeld.

He notes that the 9/11 Commission report, which also looked at the Clinton administration’s handling of terrorism, could have been compromised. “We all know what 9/11 meant to the country, and his treating those records in such a manner will always leave, in my mind, a cloud over whether or not the 9/11 Commission got full production of the records that they requested, and that to me is extremely serious and an affront to all Americans.”