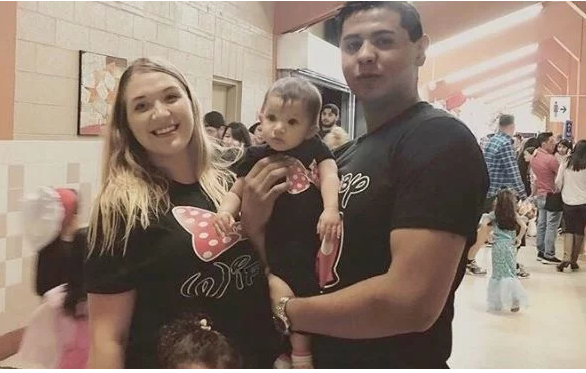 Andre was killed when he shielded his wife and two-month-old son from the killer’s gunfire.

Jordan was also killed while protecting her newborn baby.

There is a Go-Fundme campaign running to raise money for their surviving children.

Last week Deborah posted a note on Facebook BLASTING the local Democratic leaders who had the gall to say the President of the United States was not welcome in the city this week.
Deborah called these politicians “monsters” and “pure evil” for pushing their political agenda during this tragic event.

It’s such a shame that two of our local politicians (I refuse to say their names as they don’t deserve it) are saying that our President is not welcome on Wednesday. I cannot believe how these monsters are using the tragic event to push their political agenda. I lost my brother and sister-in-law on Saturday. My family and I are living a horrible nightmare. The visit from our President will be more than comforting to my family. He will not be here for a political agenda. The two monsters from El Paso, who do not deserve to be mentioned by name nor even the nicknames I have for them, are just pure evil. My brothers body was still laying at Walmart on Saturday night when they decided to make this into a political issue and push their agenda by blaming our President for this. Rather than focusing on the situation and the individual who destroyed the lives of many, these evil people selfishly turned this into a political war. I’m equally as angered by those two as I am with the person who took my brother and his wife from me, typing this I think I feel more animosity towards those two evil politicians. – Deborah