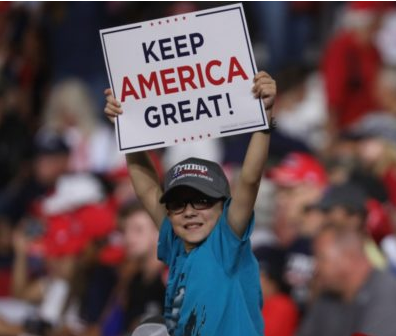 Poll: 63 Percent of Voters Expect a Trump Victory in 2020

As President Donald Trump’s approval rating remains stable, an increasing amount of voters say he is “somewhat likely” to be re-elected as president, according to a survey.

Scott Rasmussen’s latest 2020 poll revealed 63 percent of American voters believe President Trump will serve a second term in the White House, which is up 17 percentage points from February.

“The president’s job approval rating has also remained stable throughout the year,” Rasmussen stated in a daily memo. “Despite that stability, the number who believe it’s likely that the president will be re-elected has grown every month.”

He added, “In August, 63 percent say President Trump is at least somewhat likely to be re-elected, up from 46 percent in February.”

In a separate memo from earlier this month, Rasmussen noted, “63% of voters nationwide now believe it is at least somewhat likely President Trump will be successful in next year’s campaign. That’s up from 60% in July, 57% in May, 54% in April, 50% in March and 46% in February.”

Rasmussen’s daily memo also showed 76 percent of Republicans are now opposed to impeaching President Trump, while 73 percent of Democrats are in favor of it.

The national survey of 1,000 Registered Voters was conducted August 18-19, 2019 by ScottRasmussen.com and HarrisX, a polling company specializing in online surveys. Results from the full sample have +/-3.1 Margin of Sampling Error with a 95% level of confidence.