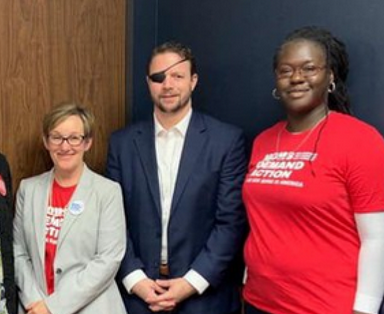 Rep. Dan Crenshaw (R-TX) has revealed a bombshell, perhaps accidentally, that he supported red flag gun control since before he started his run for Congress, showing that he lied on the campaign trail about his firm support of the 2nd Amendment of the Constitution.

“I’ve been thinking seriously about this policy for years. It was not something I recently heard of. The NRA supported well-crafted GVRO,” Crenshaw told Kaitlin Bennett of Liberty Hangout, referring to a gun violence restraining order that would allow a judge to order the seizure of firearms from an individual deemed a public safety risk.

After Bennett, an Infowars reporter and avid 2nd Amendment supporter, criticized Crenshaw on social media as a gun grabber, he sent a series of demeaning private messages to her on Twitter criticizing her activism and unwillingness to accept his excuses for infringing upon the 2nd Amendment. She exposed Crenshaw’s untoward behavior in a YouTube video.

“I hope you rethink your tactics in the future, because they are only effective at alienating people on both sides. You won’t ever persuade anyone, and you’ll drive out your allies,” Crenshaw wrote condescendingly to Bennett.

“When you alienate people, you remove yourself from any productive conversations. As you move forward as an activist, you should ask yourself if that’s really what you want,” he added.