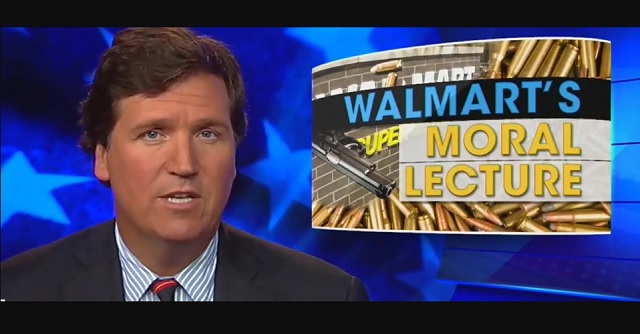 Tucker: After ‘Destroying And Degrading Rural America,’ Walmart Now Wants To Lecture Them About Guns

Fox News host Tucker Carlson accused retail giant Walmart of “destroying and degrading rural America,” then turning around and lecturing them about “how immoral they are for daring to protect themselves with firearms.”

[…] “It’s a fascinating turnaround,” he said after playing several media clips. “For years, you’ll remember, Walmart was the target of coordinated attacks from the left. Progressives accused the company of destroying small towns, and of exploiting workers.”

The retail giant figured out, Carlson noted, that it could “buy immunity from criticism by mouthing left wing pieties.”