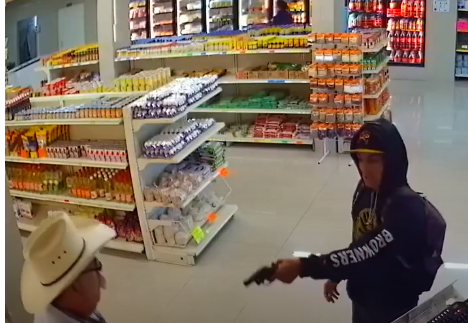 Cowboy Eyes Punk Holding Gun on Him, Slowly Takes Off His Glasses and Goes to Work

Just because there are relatively strict gun control laws in Mexico, that doesn’t mean criminals won’t still get their hands on guns and use them to do their worst.

Thus, it was no surprise to see surveillance video emerge from a butcher shop/convenience store in Monterrey, Mexico, that showed a young punk armed with a revolver attempt to hold up the store, according to Fox News.

What was surprising was the entirely undisturbed reaction the young thug received from an older man wearing a cowboy hat who was standing near the cash register, seemingly not intimidated by the armed robber.

Even as the older man had a revolver pointed his direction, he merely removed his glasses and gave the young punk a hard look.

A female customer emerged from the back of the store and started to approach the register, which drew the attention of the armed young man.

It also provided the opening the older man must have been waiting for.

Without hesitation, the man in the cowboy hat rushed the distracted gunman and knocked the revolver out of his hand. The two then wrestled to the ground, disappearing from view of the camera.

A store employee quickly retrieved the loose gun and retreated from view. Seconds later, the would-be bandit — now missing his hoodie and T-shirt — made a break for the door to escape.