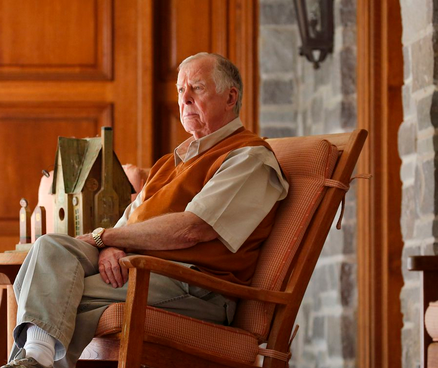 Pickens had an energy career that went from laborer to tycoon — and the Oklahoma State benefactor was among the few business elites granted “dual citizenship” on both sides of the Red River.

T. Boone Pickens, legendary energy executive, philanthropist, ardent Oklahoma State University supporter and one of America’s most famous entrepreneurs, died peacefully Wednesday of natural causes at his home in Dallas. He was 91.

Pickens had an energy career that went from laborer to corporate take-over raider to tycoon to business soothsayer. He was among the few business elites granted “dual citizenship” on both sides of the Red River.

L.A. movie producers would have been hard-pressed to create an exaggerated Hollywood version of the real-life man.

“Ralph Waldo Emerson said,  ‘Do not go where the path might lead, but instead go instead where there is no path and leave a trail.’ That was Boone,” said retired banker Alan White, one of Pickens’ closest friends. “Boone was always going some place where there was no path. He left trails all of his life. Many of us had the good fortune of being able to follow along with him.”

Pickens is the third Dallas business icon to die this year — following the deaths of Herb Kelleher in January and Ross Perot Sr. in July.

“Herb, Boone and my father were members of our society who will never be replaced,” said Ross Perot Jr. “They were unique, quality, driven men who had larger-than-life personalities and who made a huge, positive impact on our community and our country.

“I feel so blessed that the Lord allowed me to know a man like Boone Pickens.”

Plans for memorial services in Dallas and Stillwater, Okla., are pending. Pickens will be buried at Karsten Creek Golf Club, home to the OSU golf team.

Born in Holdenville, a small town in eastern Oklahoma, Pickens spent his adult years as a longtime resident of Dallas and his massive Mesa Vista Ranch in the Panhandle.

George W. Bush, Dick Cheney, Nancy Reagan, Ted Turner and George Strait were among the notables Pickens hosted at his beloved 68,000-acre ranch, which is miles upon miles of mesas, man-made lakes and rivers, and pristine wildlife habitat.

Bush praised Pickens for being “bold, imaginative, and daring.”

“He was successful – and more importantly, he generously shared his success with institutions and communities across Texas and Oklahoma,” the former president said in a statement. “He loved the outdoors, his country, and his friends and family.”

In late 2016, Pickens suffered the first of a series of small strokes that affected his speech. In mid-July 2017, he had what he called “a Texas-size fall” that landed him in the hospital and sidelined him from most public appearances.

It was quite a setback for “the Oracle of Oil” who was known for his verbal soothsaying. But he continued to make his opinions known, using Twitter and LinkedIn as his bully pulpit.

“Boone was stubborn. He was tough,” said White. “He had more charisma than anyone I’ve ever known. He was billionaire rich, and he went broke two or three times. But every time that he was knocked down on his knees, he got back up, dusted himself off and went right back at it.”