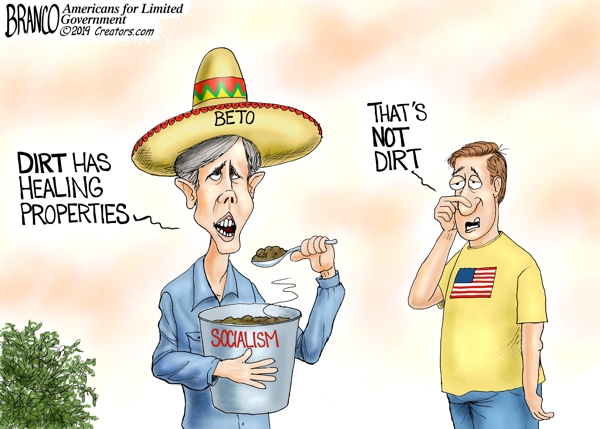 “Some on this stage have suggested a voluntary buyback for guns in this country,” ABC News host David Muir said in comments directed to O’Rourke. “You have gone further. You said, quote, ‘Americans who own AR-15s and AK-47s will have to sell them to the government, all of them.’ You know the critics call this confiscation. Are you proposing taking away their guns and how would this work?”

O’Rourke, who has largely focused his campaign on radical gun control since the tragic mass shooting in his hometown of El Paso, answered emphatically that he is proposing to take away guns he described as “designed to kill people on a battlefield.” Before O’Rourke could complete his response, the Democratic crowd erupted in applause.

“I am, if it is a weapon that was designed to kill people on a battlefield,” he said, the enthusiastic applause beginning even before he could add the “battlefield” qualifier. “If the high impact high velocity round, when it hits your body, shreds everything inside of your body because it was designed to do that so that you would bleed to death on a battlefield and not be able to get up and kill one of our soldiers. When we see that being used against children and in Odessa. I met the mother of a 15-year-old girl who was shot by an AR-15. And that mother watched her bleed to death over the course of an hour because so many other people were shot by that AR-15 in Odessa and Midland [that] there weren’t enough ambulances to get to them in time.”

“Hell yes we are going to take your AR-15, your AK-47,” he declared amid an even stronger eruption of applause. “We are not going to allow it to be used against fellow Americans anymore.”

O’Rourke, like the other Democratic candidates calling for the banning of “assault-style rifles” or “weapons of war,” has yet to fully define the term in a meaningful way.

After the applause subsided, O’Rourke added: “I want to say this: I am listening to the people of this country. The day after I proposed doing that, I went to a gun show in Conway, Arkansas to meet with those who are selling AR-15 and AK-47s, and those who are buying those weapons. And you might be surprised, there was some common ground there. Folks who said, ‘I would be willing to give that up, cut it to pieces. I don’t need this weapon to hunt, to defend myself. It is a weapon of war.’ So let’s do the right thing, but let’s bring everyone in America into the conversation – Republicans, Democrats, gunowners and non-gunowners alike.”