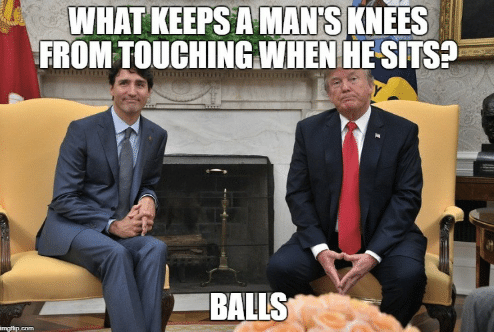 Canada’s Prime Minister Justin Trudeau was hailed as a new kind of leader when he took power in 2015. At that point, the power of the Conservative Party was at low ebb and Trudeau appeared to be a fresh face that was promising a new kind of politics for Canada.

Alas, it was not to be. Trudeau became embroiled in scandal that resulted in the resignations of two cabinet members.

The cause of his diminishing star power stems from one of the biggest scandals in Canadian political history, which arose when Trudeau’s former attorney general  said he improperly pressured her to halt the criminal prosecution of Quebec company SNC-Lavalin. Trudeau responded saying he was standing up for jobs that could have been lost if the company was convicted.

That’s his story and he’s sticking with it — mostly. Of course, no one but liberals and five-year-old children believes him.

Trudeau has since admitted fault — but stopped short of apologizing — after being charged by the ethics commissioner of political interference in the legal case.

The scandal resurfaced this week when the newspaper The Globe and Mail published a story suggesting the federal Royal Canadian Mounted Police were being blocked in their attempts to interview potential witnesses related to the matter because of cabinet confidence policies.

Scheer honed in on the issue on Wednesday, saying the Prime Minister had lost the moral authority to govern.

“Over the next five weeks I will be explaining the reasons why Justin Trudeau has lost that authority and our alternative plan,” Scheer said at the launch of his election campaign.

He admitted “fault” but not the crime of obstruction of justice. He was counting on getting some cover from the almost universally liberal Canadian media, but the G&M refused. Now he’s got another obstruction charge in the making with elections a little more than a month away.

The RCMP have been investigating the possibility that someone in the Trudeau government obstructed justice in the SNC-Lavalin case.

The news was revealed in a bombshell report by the Globe and Mail issued less than 12 hours before Prime Minister Justin Trudeau was to visit Rideau Hall and kick off the 2019 election.

This isn’t a matter of speculation or partisan spin. This isn’t something that Liberal supporters can dismiss as people inventing a scandal where there is none. We know the RCMP have been looking into the matter because they have been interviewing people involved in the case and seeking documents.

And the government has blocked them from doing so.

The Conservatives are well-positioned to take advantage of the Liberal Party’s stumbles and are flush with cash. They are looking to make inroads in some traditional liberal areas and will do it the old-fashioned way: bread and butter politics.

“You and your family are at the heart of the October 21 election. Who can you trust to help you and your family to get ahead? And the answer is not Justin Trudeau, who will only take more money from your pockets. He doesn’t know what it’s like to raise a family in difficult conditions,” Scheer said at a campaign launch event.

Brander said the party already has started sending out teams of canvassers to target key ridings — areas where they hope they can capitalize on Liberal weakness.

The party also has used some of its sizeable war chest to bolster its digital approach to campaigning, Brander said.

The sheen has worn off of Trudeau somewhat, making him look far more ordinary than he was. Whether that’s enough to put the Conservatives over the top remains to be seen.