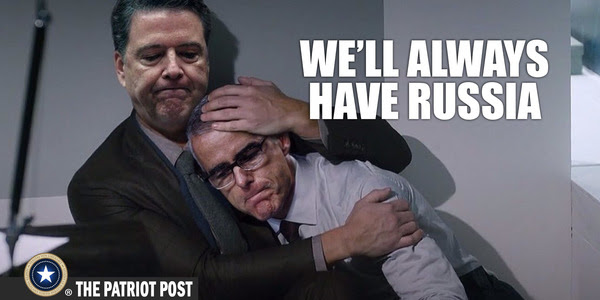 The Justice Department ultimately declined prosecution and despite Comey bragging about this, the IG indeed concluded he criminally acted.

“We are required by the [Inspector General] Act to send information that we’ve identified that could plausibly be criminal to the Department of Justice,” said Mr. Horowitz, confirming what amounted to a criminal referral.

The Justice Department ultimately decided not to prosecute Mr. Comey despite Mr. Horowitz’s team concluding he improperly leaked information to the news media. The documents leaked by Mr. Comey were sensitive, but not classified.

Comey gave portions of his classified memos to his friend-turned-lawyer-turned-unpaid-FBI-official Daniel Richman to leak to the New York Times in order to prompt a special counsel investigation into President Trump.

Horowitz released a report last month on Comey’s handling of his classified memos and said he “set a dangerous example” when he leaked his Trump memos to his friends and attorneys.

Congressman Mark Meadows (R-NC) on Wednesday asked Horowitz to investigate allegations that Comey lied during a 2017 Senate hearing because there were “numerous” times where Comey’s testimony did not match up with what was written in Horowitz’s report.

Horowitz agreed to look into the allegations, according to the Washington Times.

Comey is not out of the woods yet because the Inspector General is releasing another report on FISA abuse any day now.

Just to remind our folks back home, the most important investigation – the DOJ & FBI FISA abuses report by Inspector General Horowitz – is coming out soon! I’ll be asking IG Horowitz some questions about his report momentarily in the @GOPoversight. https://t.co/32hviK7GkN