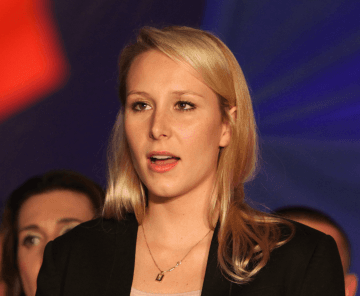 French former populist MP Marion Maréchal has called on her supporters to fight the “Great Replacement” at a major French right-wing conference.

Ms Maréchal made her comments on Saturday in Paris at the “Convention of the Right”, stating that massive demographic change, known as the Great Replacement, is a vital challenge for the right in France to overcome, Europe1 reports.

“The first major challenge, the most vital, is the Great Replacement, this demographic countdown, which already makes us realise the possibility of becoming a minority on the land of our ancestors,” Maréchal said.

She added that the consequences of the Great Replacement would be a “multicultural society that wants to be fractured and violent”.

The theory of the Great Replacement, in which mass migration results in social and demographic upheaval, was coined by prolific French writer Renaud Camus who said it was a result of the interchangeability of everything applied to human beings.

During the start of the Gilets Jaunes movement last November, Camus spoke to Breitbart London about the movement and the Great Replacement saying people were becoming “a product, a producer, and a consumer all at once, a thing, a number, not a human being”.

Maréchal also asked members of the audience to come together as a united French right and “break down yesterday’s partisan barriers”.

While she did not put herself forward as a potential candidate in the 2022 French presidential elections, Maréchal said: “Tomorrow, and I am deeply convinced about this, we will be in power.”

The speech and the event marks a major comeback for Maréchal in French politics. After resigning as an MP in 2017, Maréchal formed the Institute of Social, Economic, and Political Sciences (ISSEP) in Lyon, a political management school.

Since then, she appeared in early 2018 at the annual Conservative Political Action Conference (CPAC) in the United States where she spoke out on the effects of mass migration in France.

“After 40 years of mass migration, Islamic lobbies and political correctness, France is in the process of passing from the eldest daughter of the Catholic Church, to becoming the little niece of Islam. Terrorism is only the tip of the iceberg — this is not the France that our grandparents fought for,” she said.