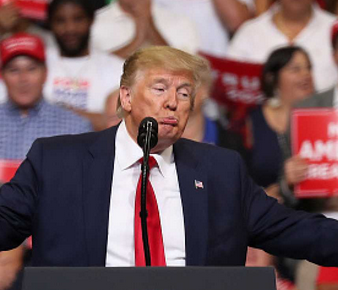 “You would think there is NO WAY that any of the Democrat Candidates that we witnessed last night could possibly become President of the United States,” Trump wrote on Twitter. “Now you see why they have no choice but to push a totally illegal & absurd Impeachment of one of the most successful Presidents!”

Trump warned that the economy would crater if any of the Democrat candidates became president.

“Our record Economy would CRASH, just like in 1929, if any of those clowns became President!” he wrote.

Trump spent debate night mostly quiet, but shared a map of Moody’s Analytics estimating that he would win big in 2020 with as many as 351 electoral votes compared to his 304 won in 2016.

All of the Democrat candidates on stage said Trump left them with “no choice” other than to be impeached, despite House Speaker Nancy Pelosi on Wednesday pumping the breaks on an impeachment vote.