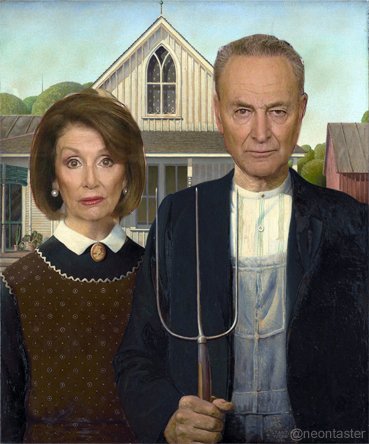 Pelosi Informs Democrat Caucus There Will NOT be Formal Floor Vote to Launch Impeachment Probe – It’s a Scam!

House Speaker Nancy Pelosi (D-CA) confirmed to her Democrat Caucus on Tuesday that there will be no formal floor vote to officially launch an impeachment probe against President Trump.

Fox News Congress reporter Chad Pergram and Congress writer for The Hill Scott Wong both confirmed Pelosi has no plans to hold a full House vote.

Rather, Pelosi and her fellow Democrat coup plotters are moving full steam ahead with secret impeachment proceedings ‘to keep President Trump and his lawyers in the dark,’ as Adam Schiff previously stated.

Fox is told Pelosi plans no vote right now to formally launch impeachment probe at this time. She has been discussing this with House Democrats

CONFIRMED: Pelosi informs caucus there will NOT be a formal floor vote to launch the impeachment inquiry

House Intelligence Chairman Adam Schiff (D-CA) admitted on Sunday on CBS’s “Face the Nation” that the reason for holding secret testimonies behind closed doors is to keep President Trump and his lawyers in the dark.

And so Schiff can selectively leak to the media…

The crooked Democrats on Tuesday changed the rules again in their sham impeachment inquiry.

The Dems shifted the closed-door interviews to depositions in order to limit the questioning to one attorney per round.

Another reason why Pelosi won’t hold a full House vote on the floor is because she will expose vulnerable red-state Democrats who are up for a tough reelection in 2020 — Pelosi knows the majority of Americans do no support impeachment.

Furthermore, the Dems are able to block the Minority members from issuing subpoenas and questioning witnesses.