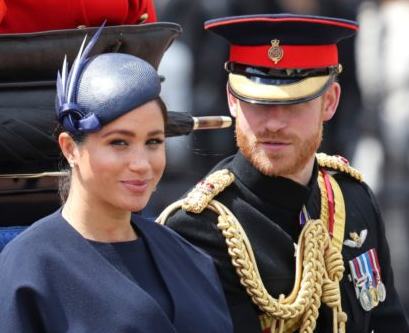 Princess Pushy — aka former Suits actress Meghan Markle; aka the current Duchess of Sussex; aka Prince Harry’s missus — has been telling anyone who’ll listen how tough it is being a member of Britain’s Royal Family.

Interviewed for a documentary on Sunday night, the Duchess was close to tears when asked by reporter Tom Bradby about the state of her mental or physical health.

Meghan: ‘And, also thank you for asking, because not many people have asked if I’m OK. But it’s a very real thing to be going through behind the scenes.’

Tom: ‘And the answer is, would it be fair to say, not really OK, as in it’s really been a struggle?’

Just a thought — but maybe the reason not many people have asked whether Meghan Markle is ‘OK’ is that most people think she has come pretty close to winning life’s biggest lottery prize and that maybe Meghan Markle’s problems, if they exist, are very much of the luxury variety.

Once just a third tier starlet known for a minor role in a fading US TV series, she is now married to one of the world’s most eligible men, a royal prince no less, worth about £40 million. None of this has to be spent on rent because the happy couple get a grace and favour five-bedroom ‘cottage’ free by the Queen, which was recently refurbished at taxpayers’ expense to the tune of about £3 million.

Plus she gets the kick — denied to even the most famous actresses in the whole of Hollywood — of knowing that her baby boy, Archie, is now seventh in line to the British throne.

On top of that there are perks like the private jet flights to stay with celebrity friends like Sir Elton John and Serena Williams, who threw a £300,000 baby shower party for Meghan in New York.

Plus front row seats at Wimbledon, which she would never access if she were just a common-or-garden US TV actress.