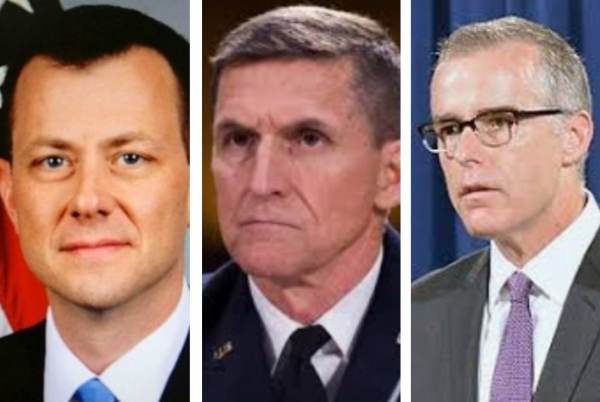 The Justice Department on Friday responded to Flynn’s lawyer Sidney Powell’s motion to compel production of Brady Material and to hold prosecutors in contempt.

Sidney Powell filed a motion a couple weeks ago revealing that General Flynn was indeed set up by the FBI with an ambush, damaging leaks and altered 302 reports.

A 302 summary report consists of contemporaneous notes taken by an FBI agent when interviewing a subject.

The DOJ on Friday argued in a surreply that Sidney Powell’s motion should be denied because there were “no material changes made after 2/10/2017 to the draft of the January 24 interview report.”

However, there is evidence to the contrary.

See below for all of the blue-lined insertions [e.g. Russian Ambassador describing a Russian response] are material, via Techno Fog:

The DOJ argued that “Even if an earlier draft of the [302] once existed, there is no reason to believe it would materially differ” from the agents’ notes.” — SERIOUSLY??

So where are the original FBI notes taken on January 24, 2017? The government is now saying if they exist, they wouldn’t be any different than the reports drafted 2 weeks after the ambush interview!

The Justice Department’s decision is that Peter Strzok’s notes were taken contemporaneously during his interview with General Mike Flynn on January 24, 2017.

Techno Fog points out that Peter Strzok’s handwritten notes are way too clean and lack shorthand (screenshot below):

In contrast, Special Agent Joe Pientka, who was with Peter Strzok in the Flynn ambush interview took notes that look like they were taken in real time (shorthand, messy):