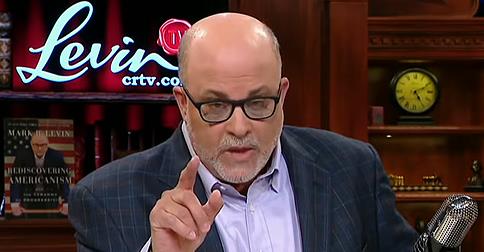 Democrat Impeachment Inquiry ‘an Outrageous Violation of the Constitution’

Levin called them an “outrageous violation of the Constitution” for being devoid of due process, and also attacked the media for its claim of wrongdoing regarding President Donald Trump’s tweet earlier in the day during the proceedings.

“To listen to the media analysis of what’s taking place in these hearings is absurd,” he continued. “It’s disgraceful. They talk about Russia. They sound like the Russian media. The Democrat Party and the media are like this. That’s why I wrote the book. They are like this. So, the president is never going to get a break from the media. So, he tweets. So due process — even though it’s not a criminal case. Even though it’s not a civil case, due process. Western civilization believes in due process. Due process even before the Bill of Rights does not apply to the president because Congress can do whatever it wants. Is what the Constitution says? Is that what that says? No, that’s not what that says. The president is not allowed to tweet to defend himself. Well, then he can’t defend himself. You name one newsroom, in this country that is calling it straight here? None of them. I’m not picking on anyone. I’m saying none of them.”